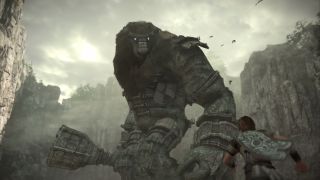 The Shadow of the Colossus remake for PS4 will be an interesting project to watch, and not just because it already looks fantastic from a visual perspective. The game is being helmed by Bluepoint Games, without significant involvement of Fumito Ueda, the original director of the game. Even so, Ueda has some ideas and changes he'd like Sony and Bluepoint to consider.

Speaking to Eurogamer via translator, Ueda said, "I transmitted my petition about the content and tuning but I don't know the implementation will be what I told." In other words, Ueda submitted some changes he think should be made for this new version of the game, but he doesn't know if Sony or Bluepoint will take his advice to heart.

Unfortunately, just what changes Ueda would like to see are under wraps. "Those things of the remake that I would like to change, I can't mention, because if I say one thing and in the final version that thing is not included, it's a problem," he said (again, via translation). And while Ueda can't say what he suggested, he did shoot down the idea of previously cut Colossi being re-added to the game.

"In this game there are 16 enemies and there's a story about 16 enemies," he told Eurogamer. "So to change this history ... I don't think about changing this history. It's finished with 16 enemies." Fair enough. So I guess the only question is, will you play it again?