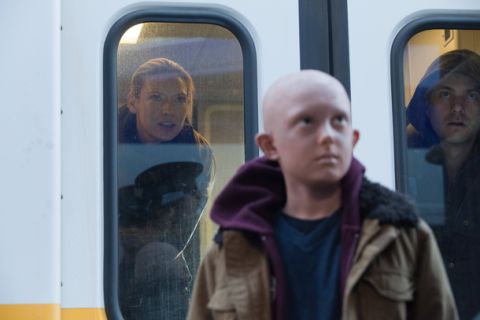 THE ONE WHERE Peter, Olivia and Walter track down September/Donald, who reveals the plan behind "the Plan" and explains how Observer boy Michael fits into the grand Fringe scheme of things.

VERDICT There's been plenty of Fringe episodes with better storylines and more compelling drama, but few have been quite so satisfying for long-standing fans of the show. While this penultimate episode is an unashamed info dump, it gets away with it because the info being dumped is so essential and exciting. It performs a similar role in Fringe mythology to "No Exit", the final season Battlestar Galactica episode that explained the importance of the Final Five Cylons. So while some may find it over-talky , if you're invested in Fringe lore, the answers on offer here enhance what's come before. (Though you've got to pity any Fringe newbies who tuned into the episode by mistake – Scanners -type head moments will have surely followed.)

So now we know why the Observers are as they are (scientists realised they could increase intelligence by removing the parts of the brain that deal with emotions);what happened to September and why he became Donald (his Observer chip was removed as punishment for his meddling, and he was sentenced to live live as a human); Michael's relevance (he's a super-intelligent mutation who, unlike other Observers, feels emotion); and the finer points of the plan (see below). Not bad for a single episode!

But – and yes, we know we say this every week – it's the intimate character moments that really earn the episode its five-star rating. Indeed, any supposedly highbrow commentators who still labour under the assumption that science fiction and moving character drama can't co-exist should be forced to sit down and watch Fringe . A couple of scenes stand ou in particulart: Walter's conversation with September/Donald in the storage locker reveals a tender friendship; meanwhile, the joy Walter feels after Michael makes him realise he won't become the Dr Bishop of old after all – and subsequent cuddle with Peter – is a beautiful and much-needed moment of emotional catharsis. In other words, the calm before the inevitable storm.

And there is a bit of genuine excitement in the episode, courtesy of an almost unbearably tense final act where the Observer net tightens around our favourite "fugitives" as they try to make it to the monorail train that spells escape. Michael stepping out of the train – What is he thinking? Is he sacrificing himself to save the others, or is it part of a grander plan? – and into loyalist clutches is entirely unexpected, and the perfect way to set up Friday's finale. It seems "the Plan" isn't destined to go entirely according to, well, plan. You know what? We wouldn't have it any other way. Can't wait for Friday night/Saturday morning. (You can delete as appropriate, according to which side of the Atlantic you live on.)

CAN'T WAIT? If the pre-finale excitement is too much to bear, prepare yourself with a poster , a teaser and an epic two-minute trailer .

THE PLAN Turns out all they have to do is use the random items from Walter's videos to build a time machine – how very Blue Peter . Then they have to take Michael forward to 2167, where the first experiments on increasing intelligence by removing emotions took place, to prove to the scientists that it might not be such a good idea, and prevent the Observers from being created in the first place. Simple, right? But there's a catch – Walter's going to have to sacrifice himself to allow the plan to come to fruition.

SPECULATION Olivia seems pretty confident that preventing the Observers from existing will bring Etta back to them. Peter's scepticism may be well founded, though – if September hadn't been around to save him from Reiden Lake (in the original timeline, at least) he would have died as a child. So not only would adult Peter not exist, Etta would never have been born. Of course, we could be wrong about this – this time stuff is damn complicated.

IT'S THE FUTURE! So that's what the Observer future of 2609 looks like – a 1930s art deco painting. Turns out Windmark answers to a "commander" – and that he doesn't always get his own way. Apparently travelling back in time to eliminate "the fugitives" before they become a problem doesn't quite warrant the "protocol suspension" and "readjustment of probabilities" it would require – take that, Windmark!

We've also learned why the Invaders chose to invade in 2015 – there was a 99.9999% probability they'd succeed. Hopefully that 0.0001% of probability will be on Olivia, Peter and Walter's side in the finale.

REALLY? We know that the Observers don't perceive time and space as we do, but how could September have expected Walter to know that his famous "the boy must live" remark was referring to Michael and not Peter. Honestly, brain the size of a planet, but no common sense...

ETTA LIVES ON A subtle cameo this week, but you can see a "Resist" poster in the background in the alley when the gang do a runner.

POOR OLD ASTRID Stuck in the lab again. She really is running out of time to do something exciting – unless you count looking something up on the internet as exciting. Which we don't.

OBSERVERS LIKE JAZZ Who knew? And they've got some moves too – that's quality foot tapping.

HELLO! Windmark's meeting with Michael could have been overstated. Instead the Observer leader opts for a simple, efficient "Hello". Has he been taking tips from the neutral planet's ambassador in Futurama ?

SHAMELESS PLUG There's a brief cameo for September's Notebook , which will appear in bookshops in our universe on 29 January. It's written by Paul Terry and SFX 's very own East Coast Editor Tara Bennett – and September, of course.

BEST LINE 1
Olivia: "Walter, why did you remove your trunks?"
Walter: "They were too restrictive. My body needs to be as free and open as my mind so I can find September."
Olivia: "Are you feeling sufficiently free and open now?"
Walter: "I am. Let's get started."

BEST LINE 2
Walter: "You never liked public displays of affection. Or going number two in a public restroom, I remember that too."

BEST LINE 3
Peter: "Is that it?"
September/Donald: "You say that as though we're not carrying technology that can bend space and time into a Moebius strip."

The last ever episode of Fringe airs simultaneously in the US and the UK on Friday 18 January (technically the early hours of Saturday 19 January in Blighty, at 1.10am).