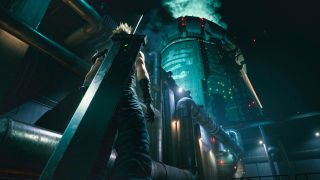 With rose-tinted nostalgia glasses on, people tend to mis-remember Final Fantasy 7. The bombastic moments that challenged players' expectations of what a PS1 game was capable of stick in the mind. But for many, despite only being the opening of the story, the Midgar section felt like the core of the iconic RPG. That's something that Square Enix is leaning into with Final Fantasy 7 Remake.

This reimagining is the first instalment in a wider project to remake the entirety of Final Fantasy 7, covering just the Midgar portion of the game. But the developer isn't merely remaking a small slice of it, instead it is looking to focus in on the elements that made the game so beloved to begin with. "We’re trying to delve that much deeper into this iconic classic, go deeper into the world and the characters," explains producer Yoshinori Kitase. "We're not just trying to make a one-for-one copy or a remaster of the original game," he says. "[We] wanted to go beyond the original and tell the story in a much deeper way, write a much more modern and fresh game experience."

Exploring the techno-dystopia of Midgar and fighting against its oppressive, natural-resource-draining ruling elite is now a game unto itself, with an expected runtime that rivals full modern Final Fantasy titles. It'll take up two Blu-ray discs, after all. "Remake" is in the title, but this is a reimagining at heart, taking all the intrigue and allure of Midgar and spinning it out into a full story in its own right, not just a "part one" – a standalone tale in a wider saga. And it really works.

"In the Remake there really is this greater emphasis on the characters, their expressions, and the storytelling as well – using this new technology and many of the things we didn’t have when we made the first game. It really does allow us to make the characters more expressive and really ramp up that immersiveness that you get in the game and the story," says Kitase.

How is Midgar being expanded?

We get to play the opening in action, as Cloud joins the AVALANCHE ecoterrorism group, who are attempting to sabotage one of the Mako reactors that are draining the planet’s life force for energy. Right from the start you feel this game is much larger in scale than the original. In part that’s thanks to battles taking place whenever you run into enemies, so everywhere is a potential setting for action. It’s also partly thanks to the greater emphasis on character moments, cutscenes, and dialogue – sequences that were once covered in a couple of pop-up boxes before have been greatly expanded.

Of course, the improved graphics make things feel larger too, as well as looking beautiful. Midgar is industrial, almost steampunk, and you get a sense that it sprawls into the distance around you as well as towers over you. The PS4-powered overwhelmingly oppressive, dank, and dark air is punctuated with moments of quiet human beauty. There’s a reason this place is going to be able to carry a whole game.

While Remake's roots in the original Final Fantasy 7 are clear, it’s important to emphasise how new everything feels. It feels in many ways like a second draft. We'll always love the original, but we can’t say no to the chance to revel in the dark streets of Midgar and get to know this opening cast of characters properly. Characters who played supporting roles in the original, like AVALANCHE members Jessie, Biggs, and Wedge, feel much more fleshed-out, and of course we’ll see so much more of that core starting party of Cloud, Barret, Tifa, and Aerith.

Having played the game, we can't really imagine Final Fantasy 7 being remade in any other way. Freed from the limitations of PS1, failing to delve deep into what makes this fascinating tiered mechanical city tick would be a huge waste.

How has the gameplay changed?

So let's delve. The Mako Reactor mission introduces us to how combat will work in Remake: it all takes place naturally as you explore the world. The original featured an Action Time Battle (ATB) system that was essentially turn-based, but with action meters that filled over time. The new game’s combat is much more real-time in comparison, very much taking its cues from the fighting in Final Fantasy 15, but adding much more mechanical depth.

Like in a hack-and-slash, buttons on the controller are assigned to standard attacks, dodges, and blocks. But you can’t just mash your way to victory. There's a tactical element. As you unleash combos, your ATB meters will fill up (and quite quickly at that), allowing you to spend them on using skills and magic. Cloud's strong Braver slash is now a skill you can use like this instead of a limit break. Normal attacks don’t do a ton of damage, so you need to be smart with using those more powerful hits. Pummel an enemy enough and they'll stagger, making it possible to land a critical hit dealing extra damage.

Different characters deal more individual types of damage now, and you can switch between them to make best use of that – Barret, for instance, has an advantage when using his gun arm on distant enemies. On top of that, different fighting stances alter how characters behave in a fight. For example, Cloud's Operator mode is more about speed and landing a flurry of quick hits. Switch to the slower, heavier Punisher mode, though, and he is able to dish out a lot more damage.

What better way to finish off the demo than with the classic Guard Scorpion boss fight? Now a huge event, its different phases provide plenty of spectacle, with the scorpion’s massive tail laser forcing Cloud and Barret to duck and run for cover. Efficiently taking out the mechanical monstrosity requires deft use of the new combat system – including, of course, employing actual limit breaks, which return, Cloud unleashing the powerful Cross Slash. It's no stretch to say that this surprisingly in-depth and RPG-like action combat might be the best approach to real-time JRPG combat we’ve ever played.

It looks like PS1's must-have game is also going to be PS4’s, with this brand-new adventure redefining the RPG experience with its fresh take on Midgar.