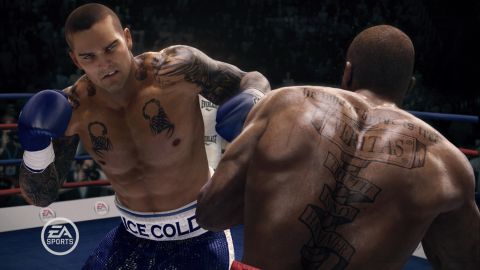 It's always a tricky thing when a developer decides to radically change the formula that made previous entries into a series a hit, but in EA's case, there were... extenuating circumstances as a result of the shuttering of the former Fight Night series devs' Chicago studio. The result was last year's Fight Night Round 4, a decidedly different take on what was previously a fairly slow, calculated game.

It was a shift that ruffled more than a few feathers; Fight Night had established itself as a thinking man's fighter, one that was less about the sheer number of punches and more about when they were used, and though there was an increased focus on counter-punching, it didn't quite have the rock/paper/scissors approach of Round 3.

Bad news for those that hated the change-up: it looks like it's here to stay, but in embracing the new direction for the series, EA Canada has at least given players a whole lot more to chew on this time around, starting with an actual story-driven side of the single-player game dubbed Champion Mode that was written by "Monster's Ball" scribe Will Rokos.

Though the three- or four-hour-long story is relatively short compared to what can be imbibed by way of the returning Create-A-Player Legacy Mode, it actually does something we haven't yet seen in sports games: it makes you root for the underdog. Sure, the whole idea of a story-based progression has happened before; Sony tried it to mixed effect with their The Life series of NBA titles, but by keeping things rather concise, the tale of betrayal and redemption by the surprisingly likeable Andre Bishop has the added benefit of presenting some interesting story-based challenges.

The tale goes something like this: an extremely promising middleweight up-and-comer, Bishop is being hailed as something of a wonderboy by nearly everyone (including in repeated live-action clips from ESPN Friday Night Fights host Brian Kenny). Andre repeatedly shoots down managing offers from shady promoter DL McQueen, instead siding with his father's trainer, Gus Carisi. McQueen, incensed, sends two dirty cops to mess with Bishop and his brother Raymond and Bishop ends up framed for assault and is tossed in the clink.

Over the years as he serves his sentence, Andre ends up becoming something of a no-rules boxing champion as he provides entertainment for the guards and other inmates until he's finally released and begins the slow road to redemption as a burlier Heavyweight fighter.

Sure, it's fairly trite by sports comeback stories, but that doesn't lessen the impact of the actual cutscenes themselves. They're voiced well, tropes and all, and the final resolution of things is immensely satisfying in that sort of fist-pumping sports movie way. The day is saved. Andre gets his payback and along the way you're treated to not only a raft of different emotional contexts, but unique circumstances that change the fight from being a simple case of beating on the other guy until he goes down.

It's a kind of slowly evolving series of matches that starts out with the contact-only grading of the amateur leagues and slowly graduates to things like having to maintain a cut eye over multiple rounds or avoiding body blows because the compromised judges will call it an illegal shot all the way up to a three-stage showdown with a boxer that's much, much more powerful than even the seriously beefy Andre. It works, and works well, adding just enough wrinkles to the formula to allow them to really gel with the increased speed of matches and particularly finicky nature of using the right stick for all the punches.

The actual boxing matches aren't terribly different from what was seen in Round 4. The Cutman interface for fixing damage is still gone, replaced with a simple meter that will refill set amounts according to how much of a beating you've taken. The boxing itself is markedly speedier than in earlier games, offering hundreds of punches over the course of even shorter games and putting a fairly heavy emphasis on the idea of counter-punching - even more than Round 4 - with just a quick flash indicating a particularly effective counter.

One-shot KOs are available to fighters with the proper stats, including shots to the body, which can make for some seriously satisfying wins - or losses if you don't actually keep that guard up and control the ring. That's still based around quick movements of the left stick, with sways and sidesteps allowing fairly speedy escapes from the corner or the ropes, but as the heavy bag minigame makes obvious, classic fighting-game-style combos can absolutely integrate movement to help sneak a shot through someone's guard if they play the straight game.

Champion's control scheme is indeed... interesting. Face buttons can be used for left/right jabs and hooks, or combined into things like upper-cuts, but the right stick was clearly meant to be the focus, as it allows for a kind of queue of different inputs that allow for fast-snap one-two-three punches or combinations that can really work over players that aren't on their guard. The decision to put the lean and lower-body blows on the same left shoulder modifier will no doubt be as controversial as the overall movement toward faster play, but it can certainly be dealt with, provided you give the game a chance to acclimate you.

It wasn't until we hopped online (more about that spread in a bit) that we realized the importance of even mixing up stronger and lighter punches. In the single-player game, particularly with Bishop as a player, his combination of speed and power meant the power punches were effectively the only way to ensure fairly quick matches. In online, though, someone offering heavy offense will actually make quick work of someone who just tries to power through with wide hooks.