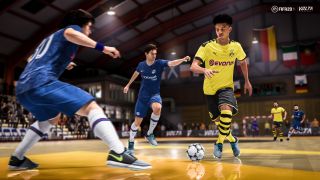 Fans of the arcade-style, skills-focused FIFA Street - which hasn't had a new iteration for almost eight years - have been crying out for EA to revisit the concept in more recent iterations of FIFA and, following rumours last year about the studio working on the idea, we can now see that Volta Football as part of the FIFA 20 package is the result. After trying out the mode, I sat down with Matt Prior, creative director on FIFA 20, to talk about everything Volta.

The first thing we touched on was exactly why now is the right time to bring street football back to the series. Prior explained that "it's the rare feature that core [players] have been asking for for a long time and, at the same time, it's something we see appealing to casuals because inherently, the nature of street is much more understandable." He's not wrong there; there's no offside rule in street football, there's only three to five players per team, free kicks are gone, and team affiliation is much less important than in the authentic 11v11 game. He went on to explain that The Journey – the narrative single player featured in the last three FIFA games – "was always intended to be a trilogy", but it's important to realise that Volta isn't simply a replacement for Alex Hunter's story; it's "way bigger than that."

Volta also offers players much more creativity and customisation options, because in the 11v11 game, most things have to be authentic. You can't create your own club in Career Mode or play as your created pro in Ultimate Team. "Volta breaks down those barriers in the sense that you can create a man or a woman, and then we've got a whole vanity suite of items that you can kit them out in. It offers whole new ways to play, whole new things you've never seen before in FIFA, it felt like the right time on many levels."

Bridging the gap between Volta and 11v11

If you revisit FIFA Street today however, it's clear that the gameplay doesn't quite hold up to today's standards. Some games have survived the test of time, and FIFA Street isn't one of them. So, how EA has evolved the virtual street football game to reach today's standards with Volta. What better way is there to learn and understand the game they're attempting to emulate than by talking to the players themselves? "One of the first things we did was we went out on the road and talked to people who play the real street game. We asked them what is it that makes the street game tick, how is it different from the 11v11 game, and some of these guys actually used to be ex-pros so it was good to get their perception. One of the things they said that was very reassuring to hear, was that yes, it's got this element of skills and an element of flair, but at its core, it's fundamentally still football. If you've got some guy doing tricks and skills but his team is losing, he'll get booed off the park, because at the end of the day that's all well and good, but it's still about winning."

That's why Volta Football is built upon the core FIFA engine, because at the end of the day it's still football. The other benefit and major factor in keeping the core mode and Volta so similar is that it means players can seamlessly transition from one to the other, without having to learn a whole new game. Prior insists there's enough content in Volta to keep Volta-only players captivated for the entire year, but if they want to try out the 11v11 game, they can without needing to adapt much. Vice-versa that works too, because while "3v3 with walls is a very different game to the 11v11 mode, it is wrapped around that core football engine."

Where is Online Team Play?

Perhaps the most glaring omission from Volta is the lack of Online Team Play (OTP), which allows each person on a team to control one player, Pro Clubs style. Having an OTP mode in Volta seems like a no brainer because it's much easier to play with two pals in an online match than it is with 10 others, and while Prior explained it was something they "looked at off the bat", it's not made it into the game on launch. "It's a massive undertaking just to deliver this and it's important that we lay the foundation and give it enough content for people who aren't into the OTP thing. One of the philosophies early on was that this does offer the opportunity to break down the barriers to that mode because that mode really comes to life when you play as an individual. It's definitely something we're interested in; we'll look, we'll gauge the reaction, and we'll see where we go."

Along a similar line, after the success of FIFA esports in the last couple of years, I was interested to know whether they had plans to support esports with Volta in any way. Having it based off the main game means there should be a sufficiently high skill ceiling, and it could provide another competitive angle for FIFA. "I do think there's opportunities there because one of the interesting things that it might bring that we don't really do in esports is that notion of each player as an individual. In esports right now it's people playing with Messi, Ronaldo, that kind of thing. With this, the fact that you can create your character, it could literally be you and two of your mates playing as you and two of your mates on a team. As a spectator of esports, that to me is quite interesting versus watching the standard gameplay. So I do think there's opportunities there, but again, it's one to consider for the future."

Ultimate Team, microtransactions, tips, and everything else

The Journey had Ultimate Team rewards when you reached the end, but is anything like that in store for Volta? Prior says yes, but explained that they're still working on the exact rewards so can't confirm what they are. "We want to give people enough content that they can kick their heels in Volta for the entire year, we didn't want to force people into 11v11, but at the same time, there will be incentives to go and try out because FIFA is such a massive game."

You can also put your pitchforks away because while Ultimate Team is infamous for persuading players to drop real money on the game, Volta won't have any of that. Every vanity item in the store can be either purchased with Volta coins (which are only earned in-game) or unlocked through specific challenges. If you're looking for some tips before jumping into Volta too, Prior has a few words of encouragement:

"I'd encourage players to try out the various different varieties because one of the beauties of it is that there is no definitive Volta experience. There's so many different experiences; 3v3, 4v4, 5v5, with/without keepers, walls, futsal, so find your feet as to what you enjoy the most. One of the beauties of seasons is when you transition into seasons, you will create your team, you'll pick your logo, and you'll also pick your home turf. Unlike the 11v11 game, that has much more gameplay resonance than a stadium because each stadium is kind of similar. So I would encourage people to experiment. If you're not a core player, I would very much encourage people to try out the new simplified skill moves and the flicks to get that element of flair, just go out and have fun, that's what it's there for."