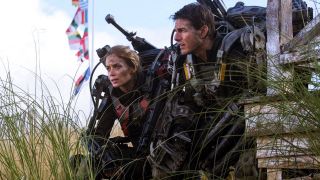 You know what's better than a sequel? A sequel that's ALSO a prequel. If there's any movie that could get away with that idea it's Edge of Tomorrow 2.

The first film scored a major win for sci-fi and action fans. Even if Edge of Tomorrow didn't quite make the gazillion dollars Warner Bros. was hoping for, it gave us a Tom Cruise that got his ass kicked by Emily Blunt. And giant aliens. And time travel.

Talk of a sequel has been kicking about for a while, and now the movie's got the official go-ahead some interesting details are beginning to emerge. Director Doug Liman will return, for what could be a bit of a sci-fi gamechanger. “That is the only sequel that I’m considering doing," he tells Collider, "and it’s because first of all the story is so amazing—much better than the original film, and I loved and loved the original film—and second of all, it’s a sequel that’s a prequel.”

A sequel that's a prequel? Normally I'd be a little hesitant to get excited about a pitch like that, but it fits well into the first movie's M.O. The efforts of Cruise and Blunt thwart the alien threat, and everything wraps up where the film originally started. Having a sequel-prequel makes sense, especially if the second outing begins at that point, and splinters off elsewhere.

“I’ve had some radical ideas about how to make a sequel that would interest me," Liman adds, "in the same way that I had ideas of how you make an independent film and then Swingers came along and it was like ‘Aha, that’s the perfect movie for me to test these ideas out on.’"

"I had these intellectual ideas on how you should make a sequel that are unlike how anybody else makes a sequel, and this script and this idea fit perfectly into that idea. So it’s gonna revolutionize how people make sequels.”

That's some seriously lofty talk, and to be honest, I'm really intrigued by it. Bearing in mind how brilliant the first film is, and how effectively it made use of action and sci-fi elements, I'm optimistic about the follow-up.