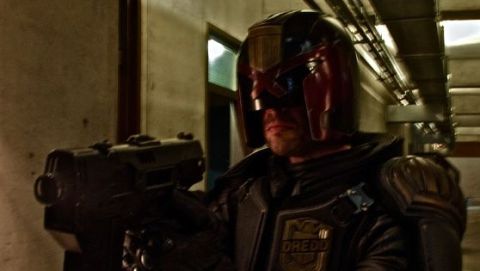 Roughly five minutes in, an incendiary bullet from Judge Dredd’s hand-cannon cooks a thug’s brain inside his own skull.

He drops, glowing like a human halloween pumpkin. Dredd grimaces. Call it a statement of intent.

The helmet stays on and the gloves are off in screenwriter Alex Garland’s grim, ultraviolent reboot, which aims to burn all memories of Sylvester Stallone and Rob Schneider from our minds.

Back to the future?

We’ve been here before. Trouble is, Urban and Thirlby grimly battling waves of henchmen in a concrete rat-trap of corridor-to-corridor combat never comes close to matching The Raid ’s sensational floor-to-ceiling carnage.

What’s worse, Dredd’s story might be even skimpier than Gareth Evans’ indonesian ripsnorter.

Stomping forward like an old-school Verhoeven movie, Dredd keeps you hooked with blunt charisma and some deadpan mega-violence. Bullets split faces, brains spill like dropped porridge and, at one point, Urban flattens a man’s windpipe with his fist.

Gore even splashes outside the frame, just one of the lovely surrealist touches from ace cinematographer Anthony Dod Mantle, who gives his first 3D film a grungy style-rinse that goes some way to disguising its lo-fi budget.

Thanks to a sci-fi narcotic that makes users’ brains feel as if time is moving at one per cent its normal speed – cute, that, from Garland – Dredd gets to lean hard on the slo-mo button, letting blood, water droplets and broken glass shiver beautifully in stereoscopic space.

More colour comes from Headey’s B-movie bitch, Wood Harris (The Wire’s Avon Barksdale) as her right-hand thug and Thirlby’s likeable counterweight to Dredd’s stoicism as the sweetie with a hard centre.

It’s a tough gig for Urban, whose chin gives the performance of its lifetime.

Having co-starred impressively in several franchises ( LOTR , Riddick , Bourne , Star Trek ), he may not quite be good enough – or bad enough? – to give this unknowable law enforcer a truly memorable wreckingball personality.

But if his head looks a little lost inside that helmet, that growly grimace remains rock-steady.