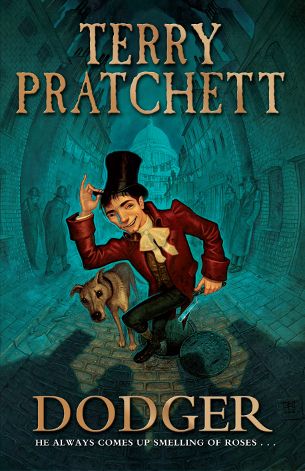 The last year has been an almost supernaturally productive period for Terry Pratchett. We’ve had dispatches from the Disc in the form of Snuff ; The Long Earth , his superb collaboration with Stephen Baxter; and now Dodger . It makes sense that Sir Pterry wants to write as much as possible while he still can, given his condition, but his impressive work rate is enough to put the rest of us to shame.

Thankfully, all this activity hasn’t meant a drop in quality. Dodger is a foray into historical fantasy that proves the goddess Narrativia still smiles upon Pratchett. When street-smart sewer scrounger Dodger saves a girl from being roughed up by a pair of thugs, he’s pulled into a world of political intrigue, media coverage and murder a million miles above his subterranean social status.

Along the way, he makes friends and enemies with titans of the age both real and fictional, including Charles Dickens, Henry Mayhew and Sweeney Todd, encounters rogues and royalty, and provides a savvy guide to a London on the cusp of the modern age.

Clearly a labour of love for Pratchett, Dodger ’s descriptions of the capital, from its slums and sewers to the homes of the middle classes and the bolt holes of the elite, paint a vivid, immersive picture. The attention to detail in both the break-neck storytelling and historical veracity are mightily impressive, while his characters remain as compelling and three dimensional as ever.

At times, it feels a little like Pratchett has used London simply to get away from the Disc and tell a story unencumbered by the weight of what has come before. But it’s a gambit that works wonders. Dodger feels fresh, vibrant and full of energy, a triumph that should be celebrated as yet another glorious gift from Narrativia.