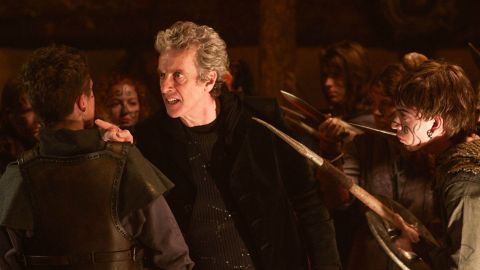 Despite an under-realised monster, getting insight into the Doctor’s hero complex makes this an illuminating episode, as Capaldi is on top form.

The Time Lord might be about 2000 years old, but sometimes he acts like a massive child. Going back to the period where the Roman 9th Legion disappeared in Scotland, he, Bill, and Nardole are put up against a creature that terrifies both the Picts (an ancient Scottish people)  and the aforementioned remaining Romans. We get to see Peter Capaldi at his best here, playing a cocky, sharp, no-nonsense Doctor who one moment will snap at the Picts after dropping an incredibly sarcastic one liner, and then get enraged when he’s stopped from being a hero. You see, at the heart of The Eaters of Light is a demonstration of how the Doctor’s saviour complex can be downright selfish.

One of Doctor Who’s core storytelling mechanics is to solve an ancient mystery by using the ‘Aliens’ excuse, but this episode is far more about the humans than it is about the light-eating, generally deadly creature bounding through the Scottish forest. Bill and the Doctor are both fiercely intelligent, and they’ve clearly reached the stage where they’re comfortable enough around each other to treat being right as a competition. Hearing Bill argue against him, and be just as cocky as he is, is a reminder of how well-matched they are. Nardole doesn’t really get a look-in, meaning at first his presence feels a bit cumbersome. Yet when he’s left alone with the Doctor, sparks fly as Matt Lucas and Capaldi bounce off each other. Lucas’ well-intentioned (but argumentative) Nardole pushes the Doctor’s sharp tongue to the very edge. Their bickering is hilarious, even verging on old-married-couple territory. One of the best scenes is when they’re caught by the Picts. With Nardole trying to ingratiate himself, and the Doctor already fed up that the Scots haven’t realised he’s a good guy, you’re reminded of why they make such a good team. Their personalities are so wildly different that their enemies never know quite how to react to their squabbling. The Doctor and Nardole are pretty much the definition of ‘mixed messages’, but it serves a purpose of leaving their enemies wrong-footed.

Growing up is the main theme of the episode. Developing quickest is Bill, her wickedly intelligent mind figuring out the TARDIS’ translating capability without having it explained to her first. It’s getting to the stage where she must be learning enough about the TARDIS to maybe fly it one day, as her mind is like a sponge that soaks up every bit of information it’s given. She’s turning from a companion into a protégé, and I have high hopes that one day she’ll be a match for the Doctor - perhaps even taking charge in one episode. On the other side of things is Carr, the Keeper of the Gate (actually an interdimensional rift with a ton of fugly monsters on the other side). Having protected her people from the creatures on the other side of the gate, Carr did what anyone would do when faced with an enemy like the Romans: she let loose the monster her people have been trying for generations to contain. During the episode she goes from a shouting, hollering girl to a hero. Facing up to her fate, she accepts the fact that she has to travel into the rift and fight the monster so it never comes out again. Having the Romans accompany her as allies rather than enemies was a brilliant turnaround at the end, especially as it meant the Doctor couldn’t sacrifice himself to fight the monster for all eternity. Unfortunately the monsters are pretty badly explained; we know they eat light, but somehow being exposed to light in great amounts is their greatest weakness. They serve no other purpose than to be the baddies of the episode, and are (as usual) billed as a threat to the entire universe. No nuance, just lots of teeth and Medusa-y tentacles. You can only have so many ‘this could be the end of us all’ moments in one season, Doctor Who. Please start to realise that.

Speaking of that moment: oh boy, we now know the Doctor has one hell of a saviour complex. The disbelief on Bill’s face when he proclaims he’s going to go in and save everyone is exactly the same sensation I felt. Really, Doctor? You’re going to go and throw yourself at this cause? There’s so much more we need him for, so choosing this moment to bow out is downright ridiculous. Bill and Nardole know it too. Hearing him splutter “stop being brave! I hate brave!” when the Picts and Romans head off into the rift at first sounds so incredibly hypocritical. But then you realise the Doctor thinks those humans are sacrificing themselves out of the same need to be a hero as him - the one that is somewhat self-centred. They’re not. They really are being brave, because unlike the Doctor they won’t regenerate. They’ll die in there. Theirs is the ultimate sacrifice, and one the Doctor can never match. He can’t really ever die. And this episode makes it look like he hates to be reminded of that. Showing the Doctor’s flaws is one of the best ways to make him feel like he could truly be real, and The Eaters of Light excels at that.

Despite an under-realised monster, getting insight into the Doctor’s hero complex makes this an illuminating episode, as Capaldi is on top form.