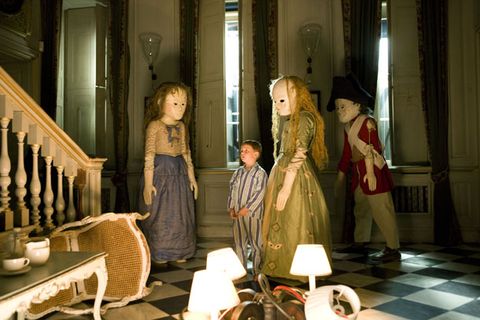 We have to talk about George

THE ONE WHERE The Doctor does a rare house call when a little boy in a tower block begs him to save him “from the monsters”.

VERDICT Following the spectacular second-half-of-season opener “Let’s Kill Hitler”, “Night Terrors” was always going to look somewhat small fry in comparison. Then again, it may have seemed slight wherever it came in the run. Almost entirely arc-plot free, it’s a minor pleasure, a creepy standalone scare story, extremely well executed but unlikely to be near the top of end-of-season fan polls. But constructing a series of Doctor Who is all about pacing and differing the tone, and you need the lower key stories to highlight the more whiz-bang ones. “Night Terrors” has many great things going for it but perhaps hasn’t quite got that little extra something that would have turned it into a classic.

Having been shot almost a year ago, and with many images from it trailed heavily in pre-publicity material, we feel quite familiar with this episode before we even watch it. Arguably, there’s little in it that feels entirely unexpected (again, maybe we were spoiled by the Nazi Germany-based twistiness), and not a great deal that hasn’t been done before. Who -wise it takes pinches of “Fear Her” and “The Girl In The Fireplace” and, from the wider world, chilly tales of dark houses and scared – and scary – children; there’s a whiff of Sapphire And Steel in the tower block-inhabited-by-the-supernatural scenario. There’s nothing intrinsically wrong with a simple tale simply told every now and then, but in terms of plot “Night Terrors” feels rather perfunctory.

Time to accentuate the positive: the claustrophobic, shadowy dollhouse locations are as beautifully shot as the exteriors of the brutalist tower block; the use of sound is exemplary; the monsters are as unsettling as it looked like they would be; the central idea about the boy being an alien being who has created this reality is an ingenious one; and Matt Smith is as superb as ever, here interacting nicely with the excellent Daniel Mays.

Regarding the fear factor level, it’s highly likely many of the children of Britain – and America! – might suffer a sleepless night tonight. “Night Terrors” had all the ingredients to ensure that, from the sing-songy children’s voices to the “something in the cupboard” idea to the menacing dolls. But was it too contrived? Was it all a bit too deliberate? The cynical might respond in the affirmative. But if in 15 years’ time the kids of today are fondly remembering the story with a shiver then it will deserve plaudits for a job well done.

A good, solid Who episode then. Not amazing, not ground-breaking, but highly watchable, elegantly shot and with some scary highlights that will stick in the memory.

DID YOU SPOT? When Alex is watching television, the announcer makes reference to a show with Kate Humble and Rolf Harris having been shown on the Saturday before. This was Test Your Pet , dating this episode to 2004. But later on, George is said to have been born in 2002, which would make him two here rather than the eight he actually is. Ah, but he isn’t really is he? And there’s that perception filter – but would that effect everybody who was ever connected with the family also?

EYE EYE Another unsettling optic orb, this time in a drawer. Moffat likes scary eyes: we’ve previously seen them in “The Eleventh Hour”, “Amy’s Choice” and “The Almost People”.

TRIVIA In 1964, Doctor Who attracted criticism for the use of scissors as a weapon in “The Edge Of Destruction”. Wonder if the use of the big pink scissors here will be similarly admonished?

BEST LINES
Alex: “Maybe it was things on telly, you know, scary stuff getting under his skin, frightening him. So we stopped letting him watch.”
The Doctor: “Oh you don’t want to do that.”