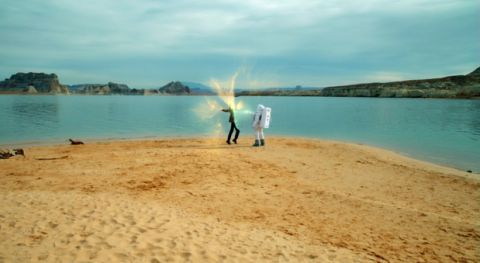 So much for easing us gently into the new series with an easily digestible romp. Whereas previous series premieres have generally been lightweight, action-driven, fairly linear runarounds, Moffat kicks off series six with an episode that feels more like the first half of a two-part finale. More specifically the first part of his own two-part finale from last year. Certainly, the idea of a future Doctor helping the current Doctor, and opening sequence with the Doctor leaving clues throughout time intended for his companions to pick up on feel very familiar. But before we start accusing Moffat of recycling old ideas, let’s look at the wood instead of the trees. Because while the trees have “Moffat” written through them like sticks of Blackpool rock, they’ve been arranged in new, intriguing, unpredictable ways, to create a Doctor Who story that comes across as fresh, and different, and reinvigorated. This genuinely feels like a show boldly moving away from its comfort zone.

And let’s be honest, Moffat does Moffat so well, there’s definitely some good mileage left in his favourite tropes yet.

“The Impossible Astronaut” opens unexpectedly, and that’s even before it pulls the carpet out from under our feet by killing the Doctor. Suddenly, Rory and Amy are back on Earth wondering what’s happened to the Doctor, while he’s leaving them cryptic messages throughout history – the Laural and Hardy scene especially is hilarious and Matt Smith proves once again what a wonderfully physical actor he is, looking a total natural next to the comedy giants. It’s a much more fun way of kicking off the series than the three of them materialising in the latest disused factory standing in for a spaceship/planet/alien HQ whatever.

Then we move to America, for the simply stunning sequence of the Doctor’s death. There doesn’t seem to be quite as much US location footage as we'd been led to expect, but those scenes we do get look beautiful, with some gorgeously-framed, iconic that border on the mythic. And hey, even though we’ve all heard, “I wear a Stetson now. Stetsons are cool!” gag a zillion times in the trailer, it still raises a smile in context.

So, the 11th Doctor’s dead (properly dead, apparently, though we don’t believe a word of it); long live the 11th Doctor. Hopefully. Because once again, Matt Smith is marvelous throughout; any lingering thoughts that he’s just Tennant with a caffeine infusion are now totally dispelled, as he takes his version of the character in all new directions of churlish grumpiness and mercurial bonkersness. His entry into the Oval Office is full of laugh-out-loud buffoonery, but when he starts telling the President what’s what, he’s 100 % believeably in control.

The new monsters are fantastic too, and another quintessentially Moffat creation, with a new and unique modus operandi . They look great, but it’s the idea that they could be around us all the time – in clear vision! – and we just don’t notice them is wonderfully freaky. The scene in the White House toilets has to rate as one of the show’s most effectively chilling moments ever.

So what we have here is a clever, ingenious plot, packed with standout set-pieces and boasting a feast of quotably funny lines. It feels darker, it feels slightly more adult, and it feels like a show willing to take risks. The direction and lighting are outstanding – especially in the underground scenes, which are edgy as hell. But there are some niggles.

At times it’s undeniably a little talky. There is an awful lot of information – a lot of it important, series-spanning information – and meaningfully salient character points shovelled into the mix, and this leads to a bit of story-telling drag occasionally. Okay, we’re not talking complicated, political infodumps on a West Wing scale, but Doctor Who isn’t The West Wing . It’s an action adventure show for the family shown at 6pm. As such, maybe, on occasion, “The Impossible Astronaut” could do with a bit more action and a little less chat. Believe us, this is more than rectified in episode two, but making your series opener a character-based piece for so much of the time seems a little risky. Each individual scene is deftly crafted and watchable, there just seem to be a few too many of them in a row, and after a while you’re almost suffering from revelation fatigue. By the time Amy suddenly announces that she’s pregnant, it’s almost lost in the wash, fighting for space alongside all the other REALLY IMPORTANT info thrown at us.

In fact, a lot of vital info suffers slightly by being delivered like a stand-up comedian going for a gags-per-hour record. Okay, we don’t want a return to the days when every piece of information was spoon-fed to us, but conversely, if something’s important then it shouldn’t be treated like a throwaway line. There’s a difference between watching something with your brain in gear, and having to hang on every single word, making notes.

But none of this cancels out the fact that “The Impossible Astronaut” is unique, exquisitely acted, beautifully shot and quite unlike anything else you’ll see on TV. Doctor Who ’s back but you can’t help thinking – with delicious anticipation – that this year, things are going to be very different.

The Regeneration Game: Many fans have complained that the regeneration effect that’s been used since the show came back in 2005 is getting a bit predictable and old hat now, and in need of a change. But “The Impossible Astronaut” is a perfect example of how having a strong, recognisable, signature effect can work in your favour. We only need to see a hint of the regeneration effect to understand what’s going on.

Continuity: The TARDIS previously became invisible in “The Invasion” (1968).

Come On Doctor, THINK! It seems unlikely the Doctor wouldn’t cotton on quite quickly who sent the letters. After all, if anyone knows how his mind works, it’s him. Perhaps he’s just keeping his suspicions to himself.

Star Turn Mark Sheppard is great, but once again Alex Kingston nearly steals the show as River Song, even if the parallels to The Time Traveler’s Wife are becoming more obvious each time she returns.

Trivia: The opening montage originally contained a scene involving Nazis, but this was later dropped when a story featuring Nazis was filmed for later in the series.

• VOTE FOR WHAT YOU THOUGHT OF THIS EPISODE IN THIS THREAD …