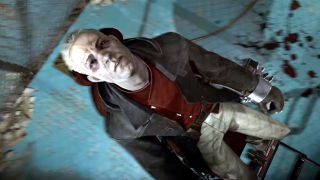 Dishonored: Death of the Outsider is an expansion, an experiment, and a conclusion. Series director Harvey Smith told me about the standalone game, which takes place months after the end of Dishonored 2, at QuakeCon 2017. It's coming out on its own rather than as DLC for Dishonored 2, but that doesn't mean it will stray from the grand tale of betrayal and redemption at the heart of the series.

Don't let Death of the Outsider's ultimate role in the larger story dissuade you if you're not already a Dishonored fan. Smith says it was built to be playable on its own as an introduction to the world, complete with refined mechanics and a video tutorial system to ease you into Billie Lurk's potent time-shifting abilities. Though in Smith's "dream world", obviously, "everybody would play from beginning to end" and get to see firsthand why Lurk and her old boss Daud feel so strongly about bringing down a god-like figure. Speaking of the end...

"I don't actually know yet what I'm going to be working on [after Death of the Outsider]. And I don't know whether there will be additional Dishonored games. But certainly for this arc related to the Rat Plague and Jessamine and those characters, this is definitely a finale, it feels like," Smith tells me, relishing this rare opportunity to give a big-budget story a satisfying conclusion. "There may be something new that we do or not, I don't know. But for this part... It feels like if we did something new we'd take a jump, you know."

For a look at the other kinds of things Arkane Studios might do, check out our review of their first-person, sci-fi adventure, Prey. And read our hands on preview of Dishonored: Death of the Outsider so you can start familiarizing yourself with the tools of the god-killing trade.