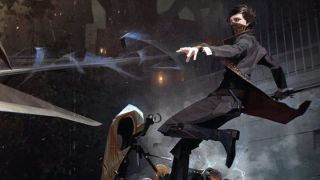 One of the fun things with the original Dishonored were the unexpected ways to link powers - often in combinations developer Arkane hadn’t always planned. Dishonored 2 is introducing new abilities and it sounds like that brilliantly unpredictable interplay is still at the core of the experience .

The new game introduces Emily Kaldwin, the previous game’s child emperor who's now a playable grown up character, with her own abilities. One of those is Domino, which lets her link enemies so she can kill them with one blow. Another is Doppelganger which creates a copy to act as a lure or distraction.

According to director Harvey Smith these are already being used in ways the team haven’t predicted. “We love it when our powers have flexible utility,” he says in the latest OXM. “We already have some startling ways that people have combined them that have shocked us. This is the emergent gameplay thing that we all love”.

One example he gives is a player using Domnino to link a Doppelganger to some enemies and then killing it. “She just assassinates it. And all three of the other guys drop,” explains Smith. “We had no idea this was possible, we never planned this. It’s just one of those systemic game mechanic interactions that clever creative players figure out as they start to experiment".

Lead designer Dinga Bakaba has another example: “Someone at Arkane came to me a while back with a question: ‘Should spring razormines be triggered by your doppelganger?’ Usually I don’t answer those questions except to say ’why do you ask?’ And he said ‘I summoned my doppelganger and I tried to place a mine nearby because I wanted to do a trap,but I actually put the mine on the doppelganger.’ So when the enemy arrives they run after her and – bam! When they catch up, they explode in gibs”.

Like the last game, the team is actively embracing this chaos. “If it’s occurred to the player and if it’s fun, we tend to embrace it,” says Bakaba. Harvey Smith agrees: “It’s just one of those systemic game mechanic interactions that clever creative players figure out as they start to experiment, and it’s why we do what we do. We absolutely love it”.

Read more about Dishonored 2 in the new issue of Official Xbox Magazine out Friday 3rd of June with Battlefield 1 on the cover. Buy or subscribe here.