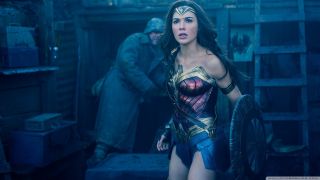 Wonder Woman is properly great so you might have been dazzled by the movie’s sheen (or Diana’s gauntlets) to get your eyes on a blink-and-you’ll miss it cameo from Zack Snyder. No worries, though: he’s given us a glimpse of his role on social media – and he’s gone all-in on the costume.

On Vevo (H/T ComicBook.com), Snyder posted the above picture, with the caption “In the trenches with Wonder Woman” because, if the directing lark doesn’t work out, he wants everyone to know he’s got a career lined up in battle re-enactments. You’d even be forgiven for thinking that he’s just pulled that picture straight from the battlefields of WW1, he’s that convincing.

The scene in question comes around the time of Wonder Woman’s most heroic scene (which was very nearly cut) and featured a whole bunch of soldiers, including Zack Snyder flanking Wonder Woman. If nothing else, it’s proof that Zack Snyder loves any cameo where he can hold a weapon, having previously gone gun-toting in Watchmen.as (another) soldier alongside The Comedian in Vietnam.

Can’t get enough Wonder Woman? Read all the details about Wonder Woman 2 - and its modern-day setting - here.