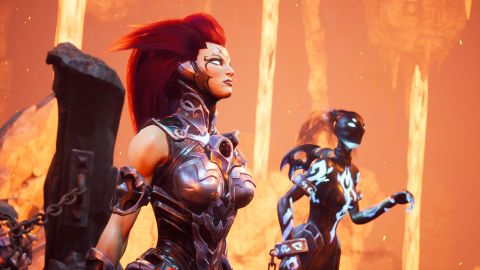 Darksiders 3 feels like coming home for fans, and combat is a blast - but it can be hard to appreciate the good when dealing with a laundry list of technical stumbles.

It's Armageddon. The end of the world. The forces of Heaven and Hell wage war on a scorched Earth. You must traverse this blasted landscape as one of the Four Horsemen of the Apocalypse in order to defeat powerful foes and uncover a sinister conspiracy. It's a setup that's as awesome in 2018 as it was in 2010 when the first Darksiders game rode onto the scene, though many of the details have changed for the third entry in this post-apocalyptic franchise.

In Darksiders 3, you play as Fury, one of this universe's Horsemen. I say "this universe" because the original horsemen of biblical mythology are often named as War, Death, Pestilence, and Famine, whereas Darksiders has War, Death, Fury, and Strife - and where biblical allegory exists largely to make us reflect on our lives in solemn contemplation, Darksiders exists to be totally rad.

I just wish Darksiders 3 had made me feel that cool all the time instead of stopping to make me wait for a room to load.

Your charge in Darksiders 3, as a whip-toting sorceress, is to hunt down and kill the physical manifestations of the Seven Deadly Sins: Envy, Wrath, Avarice, Sloth, Lust, Gluttony, and Pride. And for the first few hours of the game, it really is that simple: Fury doesn't question or consider the consequences of her mission, bouncing from Sin to Sin as she brutally murders everything in her path. Likewise, I was just enjoying the romp at first - it's been six years since Darksiders 2, and it's a joy to revisit this unique setting. But slowly, surely, cracks begin to appear.

Sometimes, those cracks are quite literal, as Darksiders 3 struggles to pull its visual weight. Character models can feel blurry and flat, even compared to their earlier iterations. Compare Vulgrim or Ulthane as they appear in Darksiders: Warmastered Edition or Darksiders 2: Deathinitive Edition and you'll notice some details (such as Vulgrim's wrinkles and scaley skin, or Ulthane's eyes and tattoos) just look worse in Darksiders 3. But this is just the tip of the iceberg when it comes to Darksiders 3's graphical issues.

In its worst areas, Darksiders 3's frame rate can take a nosedive. And even in the best areas the frame rate is unstable, often experiencing small jutters. Frequently when I spun my camera around a corner, I'd catch flashes of white at the edge of the screen, as parts of the level loaded in. Texture pop-in can be frequent and noticeable, depending on the area. Similarly, some areas suffer from a constant need to load, causing you to freeze in place as you wait for the game to catch up. A room which was meant to be shrouded in darkness was brightly lit when standing at its entrance. So, yeah. There are more than a few technical issues.

There are also, occasionally, some truly irritating challenges. Several puzzles test your ability to make it from point A to point B within a time limit, but these windows are incredibly strict, and there's often some extra objective you'll need to complete (hit a switch, throw a boomerang, push a block, etc) and so the puzzle becomes a frustrating chore as you wrestle with arbitrary restrictions. You see what you need to do, you know what you need to do, now if only the game would let you do it.

Not all puzzles or even a majority are like this, but instead of looking back fondly and thinking, "Man I was so clever when I figured that out," I find myself grimacing as I think, "I'm so glad that is behind me and I never have to deal with it again". It's not a great feeling.

If there is to be a silver lining found, it's that Gunfire Games' choice to focus on combat and a labyrinthine world map for this entry - turning the series from Zelda clone to Dark Souls copycat in the process - has paid off. Fury's whip lashes into demons, angels, undead, massive insects, and other beasts with a powerful crack, and the various other weapons she gains access to as the story progresses are just as satisfying to use.

Fury always has access to her signature whip, but there's also a powerful hammer, daggers of flame, a lance of lightning, and a sword imbued with the power of frost - best of all, you can freely switch between any of them instantly, with no cost or penalty. I was excited to try these mystical armaments out as I acquired them, playing around with each to figure out its rhythm and capabilities.

Rather than rely on either mindless button-mashing or combo memorization, Darksiders 3 combat is all about timing. Pause for a second between swings of Fury's whip and instead of a sweep she'll perform a lunging attack. Hold the attack button and Fury will create a deadly vortex around herself . And most satisfying of all, attack right after a dodge and she'll perform a special move that deals high damage and boasts visual flair.

I was always discovering new baddies to use these toys on, and this constant introduction of new foes forced me to adopt new strategies just as I felt I'd mastered everything one set of enemies had to throw at me. Even the most basic skeleton warriors can be deadly when underestimated, so focus and careful timing is of the utmost importance. And really, it's fun! Sure, I died a lot and yeah, enemies are placed in such a manner as to punish carelessness, but it's exciting to feel challenged in such a way, to always be kept on your toes.

Darksiders 3 also succeeds in terms of presentation. This feels like the game fans have been waiting for - if not in structure and substance, then at least in story and style. Fury's mission to eliminate the Seven Deadly Sins gives the game ample opportunity for the kinds of excessive, comic book-inspired designs the series is loved for, and the conspiracy uncovered in the first Darksiders is teased to be much grander than anyone had previously thought.

And though "end of the world" may conjure up images of decay and destruction, Darksiders 3's environments are saturated and evocative. For example, I don't think I've ever enjoyed an underwater section as much as I do in this game, mostly because I just get to look at all the pretty colors.

For all Darksiders 3's other faults, one could not accuse Gunfire Games of disrespecting or tarnishing original creator Joe Mad's vision. This is an Armageddon that oozes cool.

Who is Darksiders 3 for?

The Darksiders series has always existed comfortably as a middle-shelf product, driven more by creative vision than the polish and expensive marketing campaigns of AAA titles. Darksiders 3 doesn't change that whatsoever. It's just not as well-made as its competition.

I watch the framerate stutter as I attempt to fight a boss with an incredibly difficult to avoid one-hit kill attack and think, "This game is bullshit." But then I beat the boss, and I watch Fury annihilate a legion of undead angels with a spear made of lightning and think, "Hell yeah, this is awesome!" I forgive the game's glitches and flaws because I love the feel of this world, I enjoy seeing the story unfold, and Fury's attacks make me feel powerful... but is Darksiders 3 actually deserving of that forgiveness? Can something be cool enough that, by comparison, subpar performance ceases to be an issue?

If you answered yes, Darksiders 3 is for you. If not, well, it's not like it's the end of the world.

Darksiders 3 feels like coming home for fans, and combat is a blast - but it can be hard to appreciate the good when dealing with a laundry list of technical stumbles.