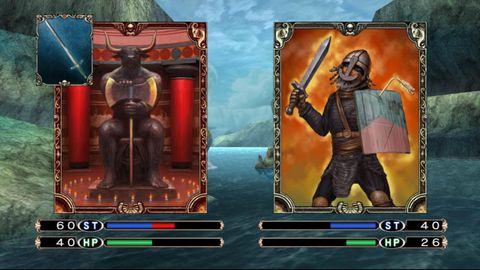 You can also use one other card each battle, such as a mace or armor or even another monster, to enhance your fighting cards' offense or defense. Finally, you can spend magic points to "level up" each cell of land - just like putting a hotel on a Monopoly square - to give it a higher rent, or even change its elemental affinity entirely. Oh yeah - you also win new cards each battle (there are more than 500) and can construct your own decks, which the game calls "books".

In fact, you'll need to do a ton of that in order to beat some of the higher-level enemies. The game gets progressively more difficult, but there’s a Versus mode that let’s you jump out of the story mode if you get stumped by a particular fight, build up your book and then go back and kick some serious ass.

Suffice to say, there's enough depth here to have you going for months. The great thing about Culcept Saga is that even if you didn’t understand anything we just described above, you can literally just jump in and start playing and you’ll do great. On an equally cool yet vexing note, you can play 150 matches (even online!) and still not fully have the skill and know-how to call yourself a Culcept Master. Translation: Culdcept Saga has an infinite replayability factor.

If you give it a chance, you’ll be amazed by how difficult it is to put Culdcept Saga down. We found ourselves pulled away from Devil May Cry 4, Burnout Paradise and Supreme Commander, all to jump into another match of cardbased tit-for-tat. It’s not because the story is so compelling. And it certainly isn’t because of some great visual wizbangery, the graphics are generally pretty ho-hum, though the art on the cards can be pretty. It’s just damn fun.