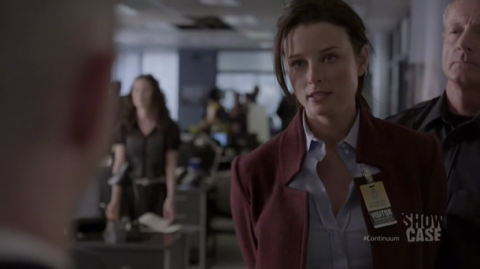 THE ONE WHERE Kiera’s cover is blown at the Vancouver PD and the Liber8 team try to go back to the future... and fail.

VERDICT The main plot in this week’s episode is a bit of a damp squib: the Liber8 gang need a giant piece of tech to power a trip back to the future, and they kidnap a scientist to gain access to the machinery at a local university. Barring one intense scene at the end in which they face off with Kiera, it’s not really all that interesting. Which means that the episode’s meat ’n’ two veg actually comes from Kiera trying to get over the fact that she’s left her family behind in 2077, while at the same time she struggles to get Carlos and his colleagues to trust her.

There’s already a nice camaraderie between Kiera and Carlos, and even when she’s forced to Taser him so she can track down the Liber8 gang, he forgives her, which proves he’s a nice guy and a good partner. This bodes well for the future. (Although bearing in mind that one of the side-effects of being Tased is peeing yourself, we’re not sure we’d have forgiven her so easily... unless Carlos has a stronger bladder than most.)

The relationship between Kiera and Alec is building nicely, too, especially when you consider they haven’t even met yet: he’s turning into her own little Jiminy Cricket. When he’s dishing out info and she’s using it in her conversations without batting an eyelid, you realise just how screwed she’d be without him. The fact that Alec and Carlos sometimes say the same thing at the same time in answer to her questions is a cool touch, too, hinting that they’re starting to work as one unit.

The scenes of Kiera and her son in the future are quite sweet, but they do make us wonder how any parent could cope with running around in the past, knowing they’ll never see their offspring again. This episode deals with her grief but doesn’t over-egg it – after all, they can’t have six episodes of her weeping inconsolably while they’re still trying to establish the series. So instead we see how desperate she is to see him again; so desperate she’ll even team up with Liber8 while they time travel. Sadly, mommy and son aren’t destined to be reunited any time soon, so we’ll just have to hope she doesn’t get too maudlin about it.

Finally, one plot twist that we love: one of the Liber8 members, Kellog, doesn’t seem to be into this whole “revolution” thing and merely wants to live his life out in this new/old timeline. The rest of the group let him go rather too easily given how homicidal they seem to be, but we adore the fact that once he’s gone he starts building up a stock portfolio and gambling in order to get rich using his knowledge – how very Biff in Back To The Future 2 of him. And hell, that’s just what we’d do too, so good luck to him.

OH, CANADA The rain in Vancouver is legendary (although don’t ever complain about it, as David Duchovny found out to his cost ). There’s certainly not much sunshine on display in this episode – and for the second week in a row Alec’s farm looks like the coldest, windiest, wettest place on Earth. Will it ever dry out?

DID YOU NOTICE? At the start we see Kiera, on her first day as a Protector, receiving some “wise” instructions from a fellow cop: “You’re gonna want to trust your gut out there, Cameron. Don’t. Instincts are good, but what’s going to make you a great Protector is the tech .” Later, however, we see Carlos saying he trusts his gut feelings about Kiera... and he’s right. Today’s policing beats future policing, yay!

HUH? The Liber8 leader, Travis (Roger Cross), gets Tased at one point but nothing happens. Is he especially hard, or is there something superhuman about him? Did the Taser malfunction? We don’t know, but he certainly didn’t wet his pants.

COOL TECH Kiera’s gun is so cool it could shoot ice cubes. Not only does it come with a nifty holo-screen attached to help with targeting, it’s also not even gun-shaped until she presses a button and it pops into existence. We’re totally against guns here at SFX , honest, but we wouldn’t mind playing with this one...

SUPER-SUIT This week Kiera’s suit gives Carlos an electric shock to knock him out, buggers up the lift he’s in so it doesn’t move, opens a car door using a “frequency generator” and receives photos like a phone.

BEST LINE
Alec: “No way! Did you actually just Tase Carlos? That is awesome!”