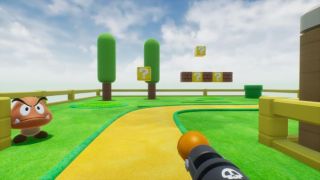 The charm of the original Super Mario Bros. goes beyond the game. The swanky tune, bright colors, and trademarked enemy design hits me right in that nostalgic bone whenever I experience it. It could work as anything, including a breezy little first person shooter.

Mapcore, a game development community with origins in the Half Life modding space, recently put out a challenge to developers to redesign the first level Unreal Tournament, Counter-Strike 1.6, or Super Mario Bros. with a software of their choosing (Thanks PC Gamer). This redesign of World 1-1 is a product of that challenge.

Level designer Sean Noonan, whose currently working on Gears: Tactics and has credits on games like Watch Dogs and Star Citizens, decided to take on World 1-1 as a first person shooter in Unreal.

"Straight out of the gate I decided I wanted to make 1-1 as a time attack FPS. I started with the FPS template and began to work out what art style to go with. I aimed to emulate Super Mario 3D Land (3DS) - I love how colourful it is," Noonan said in a Tweet thread following his progress. "By day 2 I had a couple of basics down. For some reason I felt the way to make a gun work in the Mario universe was to use a plunger? I feel like it was some unintentional Quackshot or Rabbids inspiration."

Okay so I'm doing the next @Mapcore challenge. This time participants have to remake one of these levels in a software of their choosing... (thread) #gamedev pic.twitter.com/H5r9T5lgu3July 11, 2019

Looking to scratch a platforming itch after seeing 1-1 as a shooter? Check out the best platformers ever that aren't Mario.