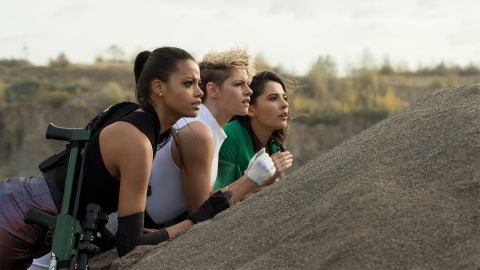 In a grim year for franchise revivals, Elizabeth Banks’ entry bites off more than it can chew in a bid to rise above the crop. Even if Banks’ second directing gig is far from the disaster its US takings suggest, the revivifying focus required for a low-interest IP reboot often goes AWOL.

Swerving between action-comedy routines, spy moves and of-the-moment messages, Charlie’s Angels ’19 only occasionally connects keenly enough with its many ambitions to land the desired in-the-moment impact: as for a lasting impressions, go figure.

When it does work, the leads and a string of sparky set-pieces provide saving graces. Back in franchise-land after the arthouse gap-years, Kristen Stewart injects off-kilter personality into often perfunctory dialogue as loose-cannon agent Sabina. Ella Balinska brings persuasive punch to fellow operative Jane, who joins Sabina – without much chemistry - to protect not-an-agent-yet Elena (Aladdin’s Naomi Scott, having fun between car-sickness eruptions), a tech whizz with info on a potentially lethal energy source.

The mission to keep this MacGuffin from enemy hands sends the plot sprawling between global hotspots, with stop-offs for a few tweaks of Angels lore (‘Bosley’ becomes a rank), some takedowns of workplace misogyny and the odd tumbleweed-moment quip. Several of the jokes flop harder than the obnoxious guy who receives a forearm thwack. But the slamming car chase, crisp heist sequence and quarry ruckus offer brisk compensations, let down only by choppy editing in the fight scenes.

Elsewhere, smoother editing might have streamlined the drawn-out stretch to the finale, where a cheesy dance, a deliciously hammy Patrick Stewart and a teamwork pay-off dangle rewards for patient viewers. Would more of that energy have stoked sequel hopes? Tough to say, but the closing credits scenes will now surely be as close as this sometimes fun, sometimes flatly awkward revival gets to the angled-for extended-universe treatment.