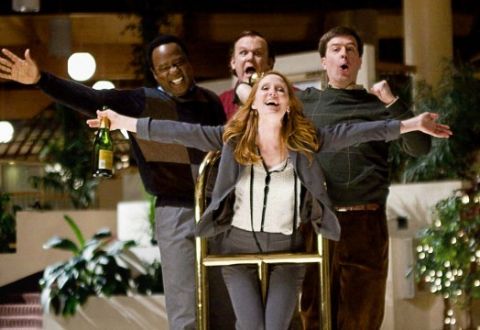 Fans of The Office (the US one) or The Hangover will already be well acquainted with the comic genius that is Ed Helms.

But while those are ensembles, Miguel Arteta’s Cedar Rapids gives him the full-on lead he so richly deserves.

His character, naïve insurance salesman Tim Lippe, is a “super-awesome” creation, as he might say. Doesn’t drink. Hasn’t flown before. Never even left the small Midwest town where he works for Brown Star Insurance, winners of the Two Diamond Award three years in a row.

Lippe is entrusted with the task of going to the annual insurance convention in Cedar Rapids, Iowa, to secure the company the coveted prize once more.

Instead, he falls in with three convention veterans – including divorcee Dean (John C. Reilly). From crashing a lesbian wedding to rocking up at a redneck party, Lippe manages to both let rip and unravel completely.

Co-produced by Alexander Payne, whose own About Schmidt so nailed Midwest life, you’d think with Arteta calling the shots, this would be another loserville story like his Chuck & Buck.

But thanks to Helm it’s never uncomfortable to watch, despite Lippe being “dweeby on the outside”. And judging by his tumble with Sigourney Weaver, he’s not a total failure – and Helms essays his emotional upheavals perfectly.

It’s not all rosy. Reilly’s crass bore grates, while the script is only stop-start funny.
Still, Lippe’s rock-climbing freak-out is priceless and there’s a nice in-joke from Isiah Whitlock Jr., who plays on his notoriety from The Wire.

It’s also worth staying for the end credits – to see Reilly perform a party trick...