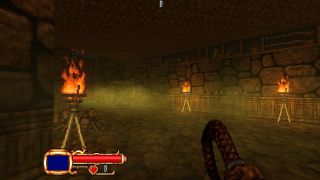 Konami's Castlevania series is having some quiet time at the moment, with 2014's Lords of Shadow 2 as the most recent entry, and no announced titles on the horizon. But if the company needs to decide on a new creative vision for the franchise, it might want to take a note from modder Andrea Gori's version, which recreates the first game in the Doom engine. Yup, it's an FPW (first-person whipper) now.

Gori calls this version "Castlevania: Simon's Destiny," and it works surprisingly well. Along with your trusty whip, you've also got access to throwing knives, holy water, and the other powerups that appeared in the original NES game. The levels are also recreated (mostly) faithfully, so if you can remember your path through Dracula's castle you might be able to retrace your steps.

We often hear about Doom getting programed into more and more absurd things, but it's less common to hear about it being used as the foundation for something else. It's kind of funny that games from long ago can be so easily disassembled by now that you could think of them more as tools used to help build other games.

Even though Gori isn't selling this mod for money, fan projects like his can sometimes earn the ire of parent companies. Hopefully Konami won't send a cease-and-desist and Simon's Destiny will be available for a long time, but if you're curious I suggest checking it out sooner rather than later. For instructions on how to download and play the game for yourself, visit the ZDoom forums.