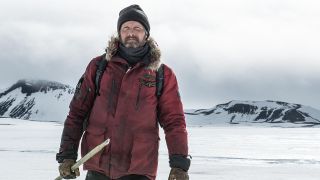 From Cast Away to All is Lost, the lone-survivor subgenre has been well served by cinema. Cutting straight to the heart of humanity, Arctic is a snow-pure example of a familiar story, in which a man comes face to face with nature’s utter indifference towards our continued existence (and perhaps, even, its contempt). As we quickly learn in Arctic, there are some places humans simply shouldn’t go.

Set in some unspecified icy wasteland, when we meet Overgård (Mads Mikkelsen) he’s already crash landed his plane in the arctic. Weeks, if not months, have passed and his routine has become muscle memory – waking up to the beep-beep of his watch, checking the fishing lines he’s set up to catch arctic trout, making a brief pilgrimage to a pile of rocks which we assume is a grave, fastidiously keeping the giant ‘SOS’ he’s cleared in the snow spotless, and spending hours winding a crank-powered device in the hopes of signalling help.

Shorn of incident or excitement, this opening sequence remains captivating. And how refreshing to see a survivor apply common sense to their actions (often in short supply in survival movies). One day, improbably, a helicopter appears but – just his luck – the chopper gets caught in a blizzard and the attempted rescue ends in catastrophe. His reaction is telling; not shock, disbelief, or even the urgent need to help, but weary acceptance. This man has seen some shit.

Despite his initial hesitance Overgård does eventually get to the chopper where one of the pilots is alive, but badly injured. Taking the woman back to his own stranded plane, Overgård treats her in the hope that their disappearance will be noticed and rescue is en route. But after a few days, with the woman’s condition worsening by the minute, Overgård opts to make a treacherous journey on foot to a point where, he believes, salvation lies.

What follows is a gruelling feat of endurance, both stark and visceral, as Overgård drags the woman across inhospitable terrain, dealing with sudden snowstorms, unscalable cliff faces and even polar bear attacks. Told almost entirely without words (Mikkelsen has about a dozen lines of dialogue, a good half of which involve shouting at the bear), Arctic gives us a deep understanding of a man we know next to nothing about purely from his actions. Never once does the action stop to give Overgård a heart-rending monologue, or cut to his anxious family at home, and the film is better for it.

Comatose throughout, the woman depends on Overgård for survival, but the opposite is also true. All but resigned to his fate when we meet him, Overgård’s connection to the woman is what drives him forward. A recurring motif is a picture that he finds of the pilot’s family, which he dutifully places beside her every night, in the hope it will be the first thing she sees if/when she wakes up. But what starts as a potentially mawkish device turns into a potted metaphor for his dogged dedication to staying alive.

Shot on location in Iceland in a mere 19 days, the film must have been a Revenant-like feat of endurance to put on screen. Every hulking footstep feels leaden, Mads’ luxuriant beard is permanently encrusted in frost. When Overgård removes his gloves you can practically feel the chill in the tips of your fingers. It’s a relentless film too, as Overgård overcomes one problem after the next you can’t help but wish the gods would give the poor man a break.

Mikkelsen’s performance, possibly the best of his career, is one of intense commitment, Overgård’s every emotion clear to read from Mikkelsen’s pained expressions and dog-tired eyes. Even taking movie magic into account, it’s clear Mikkelsen is doing much of what we see on screen. The moral conundrum at the heart of the story – should he save a woman he owes nothing to, potentially risking his own life, or take the ‘easy’ route and leave her for dead – is visualised in a handful of nexus point moments which Mikkelsen plays beautifully, while never losing sight of Overgård’s icy resolve.

For Joe Penna, a short filmmaker who rose to fame through his YouTube channel, this stands as a highly impressive feature debut – both technically accomplished and visually ambitious. The opening sequence, for example, is shot entirely with static cameras, giving the impression that Overgård is totally alone, not even a cameraman is lurking behind the lens. Shot with a primal eye for the harsh terrain of Iceland, there’s something mythical about the sight of Overgård setting out into the vast snowscape, nothing, but white as far as the eyes can see, his red puffer jacket the only burst of colour in the landscape.

In the near complete absence of dialogue, Joseph Trapanese’s foreboding score adds dramatic clout, and is suitably stirring when required, but can feel a little manipulative. And, ultimately, there isn’t a great deal here that you haven’t seen before in different settings. It can all get a bit despairing at times too. When the umpteenth set back happens laughter takes precedence over fear. But for Mikkelsen’s performance alone it’s well worth seeking out. Penna’s next film, Stowaway, will be set on a spaceship destined for Mars. Start counting the days.