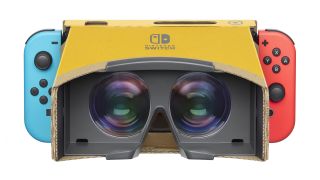 Nintendo Labo VR is one of those announcements that makes you go, "Wait, what?", because although Switch VR has been a rumour that's rumbled around the online spheres for years, I never actually thought that's something Nintendo would do. It's not because Nintendo Labo isn't a great space to introduce people to virtual reality - quite the opposite in fact - but it's more that there are already so many virtual reality experiences around that offer similar opportunities to Nintendo Labo VR. Where does Labo VR fit in?

The obvious comparisons are to Google Cardboard, another VR experience that's also literally made from cardboard. Labo VR isn't the first to make a DIY VR headset that you make out of recyclable goods, Google Cardboard actually launched way back in 2014 at the search engine giant's annual Google I/O developer event. In the four years since then, basically everyone's had a go at making their own cheap VR headset that you can just drop your smartphone into for an easy to set-up virtual reality experience.

Labo VR does exactly the same thing. It lets you build your very own cardboard VR headset from the parts supplied with the Labo VR kit, which you'll then slide your Nintendo Switch console into for virtual reality fun times. What is a bit different with the Nintendo Labo VR experience though is the fact that you, and inevitably your children, will learn as you build the headset as to how exactly it all works. From everything I built using the Nintendo Labo starter kit when it arrived in April last year, the software is incredible at detailing the intricacies of how each creation works, and no doubt the VR software will do exactly the same thing. There's definitely a bigger element around virtual reality education when it comes to Nintendo's VR offerings right out of the box than other offerings on the market.

However, the biggest difference between Nintendo Labo VR and Google Cardboard will be price. Google Cardboard retails for anywhere between $5 / £5 and $20 / £20. Nintendo Labo VR though, is much more expensive than that (without considering the price of the Switch with it, which I'll assume anyone interested in Labo VR already has). There are a few different packages available, with the cheapest coming in at $39.99 / £39.99. That includes the Labo VR starter pack, and the Blaster pack that offers a game where you fend off an alien invasion using the cardboard shotgun peripheral. If you want all six of the Labo VR experiences (VR goggles, Blaster, Camera, Bird, Wind Pedal and Elephant), you're going to have to get the $79.99 / £79.99 edition. That's quite the contract to Google Cardboard's entry point. But, it's also important to note that it does sit comfortably far beneath the entry price point for something like Oculus Rift (which requires a hefty gaming PC rig to actually run and an asking price of circa $450 / £399), and PlayStation VR (which requires a PS4 and another $300 / £250 investment.

The potential lies in games

It's a much easier sell than other, more established, virtual reality offerings then in terms of price, but what about what you can actually play on it? The full kit comes with six experiences, as I've mentioned, but what Nintendo Labo does have in its favour is the power of, well, Nintendo. Just like Sony's PlayStation VR and range of really amazing, best PSVR games that range from indie titles to big AAA affairs, the Nintendo Labo VR has the potential to extend beyond the six mini-game offerings that will be available at launch in April. Firstly, there Android and iOS VR games absolutely ripe for porting to the Switch, but that's only if Nintendo allows them onto the Nintendo Switch eShop and makes the VR capabilities available outside the Labo software. But secondly, imagine the potential of a selection of the best Nintendo Switch games adding VR components.

Mario Kart VR already exists, courtesy of a Bandai Namco arcade, so would it be that massive a leap to expect a tie-in with Mario Kart 8 Deluxe. After all, you can already play the latest Mario Kart title using the Nintendo Labo steering wheel. Was that a hint to a bigger Labo tie-in? Perhaps. I can also see VR versions of games like Captain Toad Treasure Tracker, or even Yoshi's Crafted World, absolutely working. Imagine being able to manipulate Treasure Tracker's little dioramas using the Switch's Joy-Cons as kind of PlayStation Move controllers.

Although, that's the little Nintendo fangirl getting very carried away with herself, because there are plenty of technical problems holding the Switch back from being a proper virtual reality machine. None of the Labo VR headset options currently come with any kind of headstrap. Instead, you're going to have to hold up the equipment yourself as you use it, with the Switch nestled inside. That's alright if you're using a Google Cardboard with your phone stowed inside, but the Switch is fairly weighty, and the Labo VR looks to be quite cumbersome. How quickly will your arms get tired? I can't imagine we're looking at immersive, longer play sessions here at all, but more of a pick up and play for 10 minutes or so type experience.

Then there's the actual Switch itself. The Labo VR is going to work by getting your face really close to the Switch's 720p, 60fps display. Most VR headsets on the market offer much higher refresh rates, and pixel density than the Switch to ensure that you're getting the best experience. Even your phone is going to be closer to a 1080p resolution (if not more if you're rocking something more recent), and with a smaller screen than the Switch that means it becomes much harder to see the individual pixels when you're that close to the screen. That poses the question of how good the quality of Switch VR is actually going to be? To put it into perspective, the PlayStation VR offers a resolution of 1920 × 1080 (960 × 1080 per eye), so you're looking at a significant step down in quality using the Switch, which will work out at 1280 x 720 (640 x 720 per eye).

So then, the potential of Switch and Labo VR is huge in terms of official Nintendo VR games, building upon an already established mobile VR game space, bringing VR to a younger audience and applying classic Nintendo principles to an under-explored genre. But whether Nintendo takes it that far, or if the Switch is even capable of taking us there is another question altogether. We'll have to wait until April (at least) to see whether Switch VR will be trapped in an odd middle market between Google and PlayStation, and whether the hardware will prove underpowered comparative to the expectation set by the likes of Oculus and PlayStation. But it'll be an interesting adventure to watch unfold.

For now, let's just get excited about all the awesome upcoming Switch games, or watch the video below to explore our pick of the current best offerings: