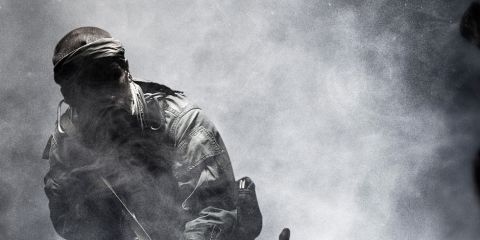 The Call of Duty franchise has achieved staggeringly huge commercial success on consoles, thanks in large part to their consistent emphasis on quality. Such has not been the case for Call of Duty on handhelds, and that trend continues with Call of Duty: Black Ops Declassified. Instead of changing the perception of the franchise’s portability, Declassified continues the limp tradition of mediocrity established by its predecessors.

Call of Duty: Black Ops Declassified’s uninteresting single-player campaign lasts for all of an hour--if that. There are no checkpoints in each of its 10 levels, which isn't particularly a problem, considering each mission only takes two to five minutes to complete. The campaign follows returning Black Ops characters Alex Mason and Frank Woods, and is supposed to bridge the gap between the first game and the recently released sequel, Black Ops II. But there’s little semblance of a cohesive narrative between the missions, let alone between Declassified and the two console titles.

The short-lived missions also suffer from truly atrocious enemy AI, which acts as more of an annoyance than a challenge. Frequently, you’ll be faced with enemy soldiers that are able to blindly fire at you through the boxes, barrels, or walls they are hiding behind. Enemies will also run straight at you, even past you at times, with weapons down, seemingly ignorant of your very existence. Raising the difficulty doesn’t spike the challenge all that much: You’ll lose health more rapidly, and your weapons won’t be as powerful, but the computer AI routines still subscribe to the same poor judgment. Declassified makes the mistake of equating endless waves of enemies with difficulty. When the AI is as inept as it is here, you’ll still be able to dispatch foes with ease no matter how many are cluttering up the screen at once.

Though the solitary portion of the game lacks any kind of real replayability or polish, the one saving grace for Declassified can be found in its multiplayer. With support for up to eight players at once (via ad hoc or Wi-Fi), the franchise’s competitive side is replicated well on the Vita. Declassified’s customization options aren’t as robust as Black Ops II’s “Pick 10,” but there are a handful of match types to play and plenty of weapons, killstreaks, and peripherals to unlock.

The offensively brief single-player campaign is again evident in the multiplayer though, as all of the maps are incredibly tiny, and offer little in the way of unique design. Nuketown, a notoriously small killing-floor of a multiplayer map, returns in Declassified as Nukehouse--it’s literally the same map, but cut in half. Matches on all the maps are often frantic, with kills and respawns happening at an alarming frequency, which ends up feeling more chaotic than entertaining.

Further exacerbating Declassified’s online issues are some connectivity problems. The multiplayer suffered from some major connection issues and glitches at launch. Even when a lobby is full of players, there’s a good chance the map will never load, and you’ll be dropped back to the main menu instead of into a match. It’s also not uncommon to find bodies frozen in time mid-death throughout a level. Oddly enough, the network issues aren’t just limited to the multiplayer. Frequent interruptions from the game stating that a wireless network is unavailable will crop up in the single-player portions, causing the game to pause and derailing whatever momentum you had going.

Be it single- or multiplayer, aiming is problematic due to the analog sensitivity being sluggish. Tweaking the sliders doesn’t seem to make much of a difference, and as a result, the overall controls just don’t feel as tight as they should. Fortunately, Declassified makes use of snap zoom, which auto-targets nearby enemies when using iron sights. This becomes a majorly important part of your tools in dispatching enemies with any kind of urgency. Movement also feels a bit awkward: Unless you turn it off, the game uses auto-sprint to help you traverse levels with a bit more expediency. Declassified doesn’t do a good enough job recognizing the proper moments to utilize the auto-sprint, and can sometimes leave you in a tight spot since you couldn’t run from an explosion fast enough.

The standard controls don’t offer much when it comes to consistency, but the Vita-specific additions are even more perplexing. Declassified features some unique control aspects to take advantage of the touchscreen and rear touchpad. Tapping the touchscreen to activate melee attacks isn’t a bad idea, but too often, the attacks miss the intended target and the range is a bit tricky to figure out. Grenade tossing is also mapped to its own icon on the touchscreen. The only issue that arises is Declassified’s inability to consistently differentiate between trying to throw your own grenade versus throwing an enemy’s grenade back at him, as the prompt shows up in the same spot. Again, it’s another range issue, where you must be in a certain radius for the touchscreen controls to work properly. The only time the rear touchpad is used is to hold your breath when sniping. The touchpad controls aren’t as intuitive as using a trigger or bumper, but the sniping moments are few and far between, and those controls worked just fine when needed.

Call of Duty: Black Ops Declassified fails on almost every level to bring a faithful and competent version of the top-selling franchise to the Vita. The single-player feels like a series of demos strapped together, and the terrible AI only piles on more mediocrity, leading to an absolutely incomplete experience. The adequate multiplayer offering does give die-hard Call of Duty fans something to be excited about, but even that portion of the game feels slapdash and rushed. Declassified is a game that was better off staying classified.