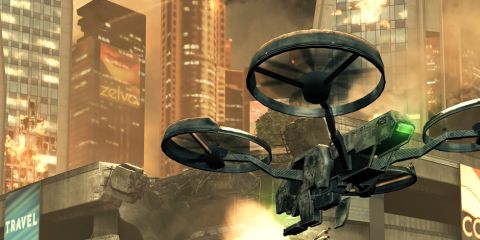 Right when you were thinking you could skip the annual Call of Duty release due to franchise fatigue or simply wanting to take a year off, Treyarch delivers one of the most full-featured and best games in the series. Call of Duty: Black Ops II makes improvements to the formula in every single one of its game modes--from its incredibly balanced and thrilling multiplayer to a campaign that's engaging and full of surprises and a Zombies mode that could pass as its own stand-alone experience.

Black Ops II takes off in the year 2025, with Black Ops' Sergeant Woods pushing 90 and David Mason (son of Black Ops lead character Alex Mason) taking over as leader of the future US Navy SEALs. Cyber-terrorist and all-around-bad-guy Raul Menendez has a bone to pick with the Masons, Woods, and the U.S. of A. over the loss of his disabled sister, and he has waited the good part of forty years planning his revenge. The story remains engaging throughout, with surprises and plot twists that change depending on your performance and several life-or-death choices made throughout the six-hour campaign.

If that sounds unlike any Call of Duty you've ever played, that's because it is. Black Ops II's story contains alternate paths that change small portions of the campaign, leading to multiple endings. Whether you meet the specific criteria of some objectives can determine if certain characters live or die, so taking too long to rescue a V.I.P. or making a wrong turn during a driving sequence might completely change the ending. The branching story is surprisingly dynamic, and seeing the substantive alternate endings adds another reason to replay the campaign after the credits roll.

The missions alternate between flashbacks set in the 1980s, starring Alex Mason and Woods, and 2025 missions from the perspective of David Mason and his high-tech Spec-Ops team. The variety is staggering and well-paced, and though there's plenty of running and gunning, all of the set-pieces are memorable and exciting. One mission, you'll shoot at tanks with a rocket launcher while riding a horse; the next, you'll guide a spider-like recon drone through a winding network of vents. The campaign excels with its pacing, excitement, and delivery, but falls short in one of the new additions: Strike Force missions.

The new Strike Force missions are optional levels that pop up during the campaign. Unlike the standard missions, you can choose to play from the first-person perspective of any unit on the battlefield; alternatively, you can swoop up to the tactical overhead perspective in which you select units and order them to move, attack, or capture points like you would in a real-time strategy game. It all sounds good on paper--but in practice, the AI doesn't work well enough to play exclusively in the overhead view (which should've been a viable option). Playing in first-person isn't much better. Enemies run out from cover to be mowed down with your gunfire, so it isn't much of a challenge.

The addition of the Strike Force missions might have come short, but the advancements in the fan favorite Zombies mode vastly improve the apocalyptic survival gameplay over the previous titles. The undead shooting survival mode has expanded to a level that is basically a separate title in itself. The traditional Survival mode (in which you hold out as waves of angry undead beasties attempt to eat your brains) is now joined with three new modes: Grief, Custom, and the expansive Tranzit mode. Grief lets up to two teams of eight total players attempt to survive the Zombie horde and outlive the other team by finding ways to get them killed. Discovering creative ways to deter the other team is hilariously entertaining, since you can toss zombie bait into opponent's defensive positions, and knife other players off balconies into the zombie horde. Custom games adjust the match settings like your starting round, difficulty, and whether want the mystery box power-ups to appear.

Tranzit expands Zombies from a traditional horde mode to a full apocalyptic adventure. You still must survive waves of undead attackers, but you can also explore the massive world map using an automated bus as transport and interact with a new puzzle element involving "parts." Parts can be used to assemble special items with unique properties, like power generators or riot shield-like weapons--pushing players to explore, take risks and develop strategies to open new doors. You’ll spend hours exploring and experimenting in Tranzit's open world, and when you and your friends unlock something new, the return for your effort is extremely rewarding.

But that’s enough about working cooperatively--what about the part where you get to shoot your friends in the face? Black Ops II's multiplayer has received several game-changing improvements. First off, the class customization uses a "Pick 10" system. Players have ten points to choose the items they want in their loadout, including weapons, perks, and the new Wild Cards that allow you to do things like equip extra perks or add an extra attachment to your primary weapon. You can also get rid of slots you don't use. Don't want to have a Perk 1? You don't have to. Use that point to add an extra lethal grenade or an additional Perk 2. Pick 10 gives players much more freedom in the way they choose their loadouts and keeps the competition balanced at the same time.

Killstreaks have also gotten an overhaul in the way they are earned and are now called Scorestreaks. Kills are no longer the only way of earning the multitude of air support, drones, and turrets that stack up the kills for you. With Scorestreaks, camping out and racking up kills is often the slowest way to earn your streak bonus. Higher score values are awarded to players who put their efforts toward match-winning objectives, like controlling capture points, planting bombs, and guarding flags. The score system becomes a huge motivator for your teammates to go for a flag capture, rather than camping out and trying to earn a Stealth Chopper, making the cooperative effort all the more thrilling.

The Scorestreaks themselves have also changed with the game’s futuristic setting, but most generally follow the same function as their previous counterparts. Being able to unleash and control several drone types and Predator missiles have a secondary cluster bomb option add variety to old favorites, but new streaks like the Guardian have particularly strategic uses. The heat-wave projecting turret prevents opponents from crossing its area of effect, essentially forcing them to find an alternate route and creating bottlenecks on the map. Streaks like these create new strategic options in team games and can be devastating to more disorganized opponents.

Outside of the gameplay, Black Ops II has also received several other upgrades as well. The Codcasting feature allows players to commentate on matches, livestream, and share their videos online. Then there's League Play that ranks your skills and places you in brackets with players that are at your skill level. This is the most feature heavy multiplayer offering in the series' history with options that will appeal to a variety of players.

Treyarch blasts away 'franchise fatigue' with one of the best Call of Duty experiences to date. Black Ops II delivers on all fronts. Zombies drops you into an intense, expansive world with untold secrets to discover, multiplayer's Pick 10 system and Scorestreaks open up new strategies to exploit, and the single-player campaign warrants repeat visits from its captivating, branching storyline. Treyarch introduces new ideas to the tried-and-true game mechanics of the series and improves upon them. Every aspect of the game has been honed to a razor-sharp experience, complete with beautiful visuals and rock-solid controls. Thought you were done with Call of Duty? Think again. This is the new Call of Duty. This is the definitive Call of Duty. And this is a shooter that absolutely can't be missed.

This game was reviewed on Xbox 360 at a review event.