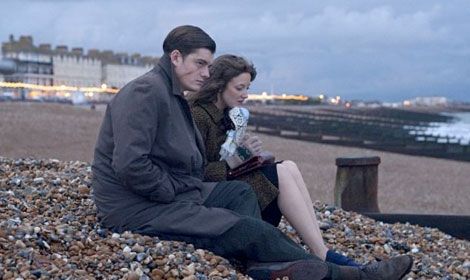 This new stab at Graham Greene’s novel could easily have been a travesty of the revered 1947 adaptation, so it’s a relief that it’s hardly disastrous.

Early optimism, though, caused in part by the presence of Control star Sam Riley and a fast-rising Andrea Riseborough, was misplaced.

Despite a gorgeous look (achieved with vintage lenses) and a quality supporting cast of stalwart Brits (Helen Mirren, John Hurt and Andy Serkis), it’s hard to class this feature debut from Rowan Joffe (son of Killing Fields director Roland) as anything but a letdown.

As Pinkie, a brutally ambitious Brighton hoodlum, Riley certainly looks the part, all widow’s peak and Ronnie Kray suit. But when he opens his mouth, we’ve lost the vicious charmer Richard Attenborough played in the first version, and have instead a stage-school ‘fug’ accent, breathy like the Italia Conti types trying to sound tough on EastEnders.

Bottom line is, he’s not charismatic or menacing enough. So when the plot comes to focus on innocent waitress Rose (Riseborough) and her infatuation with Pinkie, who in turn marries her to stop her spilling the beans about a murder she’s witnessed, it torpedoes the whole enterprise.

It’s just not conceivable, unlike with Attenborough, that this woman could love him so much. Not even Riseborough’s star-making turn, gradually moving from a weak vulnerability to real self-possession, can bridge this credibility gap.

The problems intensify thanks to the muddled approach to the overt Catholicism of Greene’s original. He told a spiritual parable which happened to have a criminal at its centre. Here, either a tin ear for adaptation or market pressures have turned this inside out and delivered a gangland thriller with Catholic agonising as window dressing.

Like the 1964 mods-and-rockers setting, it feels tacked on, and just adds to the inconsistencies which hamper the film, for all its obvious good intentions.