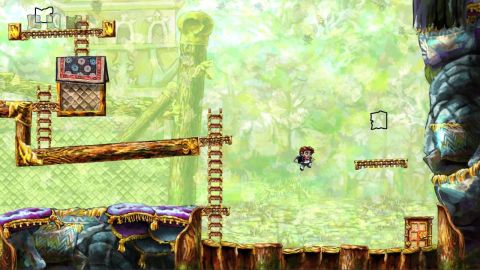 There’s a cruel irony in the fact that PS3 owners have had to wait for so long to see this time-bending, small-budget, big-ideas puzzler on PSN. One of the most imaginative download only games ever created, Braid proves continually inventive, perplexing, beautiful and clever. So very clever that perhaps the game’s only flaw is its desperation to let you know just how smart it is.

Braid’s brand of platforming will be instantly accessible to anyone who’s hopped, skipped and jumped through Mario’s Mushroom Kingdom, and the smart time-twisting mechanics that feed into it is done at a pace that never quite overwhelms. You find yourself in lush worlds filled with the familiar obstacles of platformers past – enemies with heads that need jumping on, carnivorous plants, spike pits and a kidnapped princess who’s always in another castle.

In contrast to Mario, getting from one side of a level to another in Braid is rarely a great feat, largely because every misstep can be corrected by pressing a button to rewind time. Unlike, say, Prince of Persia: The Sands of Time, there’s no limit on the extent to which time can be reversed, allowing you to turn back the clock all the way to the very second you stepped into the level. It makes the usual platforming problems a bit of a cinch – the real challenge comes in collecting jigsaw pieces along the way. Each is separated from you by a conundrum, the unlocking of which requires you to master the manipulation of time in increasingly tortuous ways. Sure, you can finish a stage, but mastering it takes some real dedication.

There are levels where time advances as you walk from left to right, and spins back with every step in the other direction. Later, placeable time wells slow everything around them, increasing with proximity, and every rewind creates a doppelganger who plays out your preceding (or is that proceeding?) actions, leading to solutions where you have to jump on your own head to reach another platform.

Every zone has a trick that’s subtly introduced and then tied into knots and wrung of its potential. Most are supremely elegant and have a crisp internal consistency – although the graphical simplicity sometimes fudges the complexities of trying to put a key into a lock from the future in the past. Otherwise, Braid is an aesthetic masterclass – an antidote to the knowingly lo-fi graphics in most other retro-inspired games. The music, too, as it slides backwards and forwards with your contortions of time, is powerful stuff.

Then there’s the narrative, should you wish to sample it. It’s tucked away as an optional extra in text boxes that pop up when you walk across them. It’s rather overwrought – an intentionally obscure, fussily impressionistic story of memory and obsession. It’s clever, but in an ostentatious way, trying too hard to be difficult, like a sixth form James Joyce medley. Still, whatever narrative exists is largely disjointed from the game itself, its themes only really condensing in the action of the last level – a brilliant moment in which notions of memory and perspective crash together with the game’s time-bending mechanics.

With or without the wordy appendage, Braid is close to genius. Though informed by platforming convention, it’s a game of greater ambitions. Booting Mario down the rabbit hole and then firing him beyond the infinite, PSN welcomes a true classic – about time.