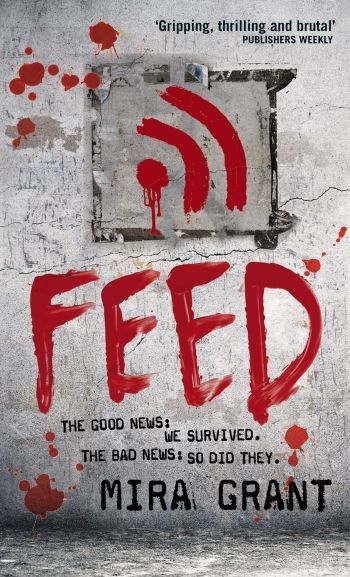 There's plenty to chew on in this near-future zombie tale

The basic idea of Feed - a virus turning people into zombies and wiping out most of the population - is hardly new, something author Mira Grant acknowledges. She even has some fun with it, making George Romero’s Dead films responsible, in part, for the survival of humanity, and leading to a generation of children growing up with names like Georgette and Georgia.

Rather than plump for the usual post-apocalyptic scenario, all derelict buildings and bands of scavengers, Grant has thought long and hard about her virus and the world it’s led to about 20 years in the future, with some areas abandoned to the Infected but others still inhabited by the living. Since everyone carries the virus, people turn when they die, so strict precautions are taken everywhere. And because of the mainstream media’s reaction to the original outbreak, and the way it was handled by bloggers, the blogosphere has become huge, and a valuable news source.

The three main characters are all bloggers: Shaun is an “Irwin”, blogging about interactions with the Infected; George (female) is a Newsie; and Buffy a Fictional. All work together, dreaming of being read enough to be able to break away from their current network and start their own. They get the opportunity to do just that when offered the chance to follow a senator’s campaign to become the Republican party Presidential candidate. Unfortunately someone doesn’t want him winning, and after a suspicious attack on the compound where his convoy’s staying the three bloggers start looking into a potential conspiracy...

Feed is a proper thriller with zombies. Grant doesn’t get carried away with describing her world or the virus. She’s clearly thought both out brilliantly, but she doesn’t let it get in the way of a taut, well-written story.