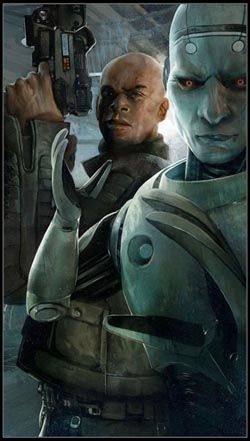 In a future where humanity has largely evacuated Earth and the Conglomerate, a huge corporation, runs society, there's a strict social order. Menials are at the bottom of the pile, an almost Untouchable-like caste of people who do the scut work not even a robot can be spared for. Jon and his family are Menials, but used to be much higher in the pecking order. Jon was a Conglomerate Enforcer, a marine at the spearhead of the Conglomerate's never-ending push for new worlds and other resources until a disastrous first contact mission ended Jon's career and condemned his family to poverty. So when an old friend approaches him and makes an offer – a new first contact mission bodyguarding Samantha, the daughter of a powerful executive to a peaceful, unspoiled world – Jon accepts. It’s a chance to undo the mistakes of the past and, crucially, a return to Enforcer status for him and his family with all the benefits that entails. Along with a ship’s crew, including Jasson and Toni, a pair of scientists and Potter, the ship's primary robot inteligence, the team sets off, little realising that the world that awaits them is far less peaceful, and more dynamic, than they can possibly imagine.

The character types you find in Anomaly will be familiar to anyone who's seen Star Wars . Jon is a likeable, scruffy badass, Samantha is a slightly uptight pseudo-aristocrat and Jasson and Toni are charming, and charmingly ineffectual non-combatants. However, whilst the book sticks to established furrows to begin with, all of them have really surprising character moments as the story unfolds. Jon is revealed to be both a student of history and an unusually compassionate leader, Sam's pragmatism is vital to their eventual victory and most fascinating of all, Tonni finds his combination of illness and intellect makes him a vital part of the war effort. They all start as standard characters but they're all massively changed by their experiences on Anomaly and the people they meet there.

Speaking of those people, Anomaly is, visually, astounding both as a world and a book. The book is a massive, landscape-format hardback which ships in its own case. Even outside the case, the book's huge and at over 300 pages of story, expansive too. Anomaly, the world, is more than worthy of that level of exploration, with multiple intelligent races, each with their own unique biology, vying for space. This is where the art sings, and as the survey team meets its new allies and enemies, each race feels real and well-rounded. The same can be said of the book’s tone; there are moments of jaw-dropping spectacle and real, physical horror. The moment the team realises what's happening to its technology is a particular standout, and Tonni's reaction as his prosthetic eye literally disintegrates out of his head is horrifying. Likewise, Jon's duel for leadership of the People, one race on Anomaly, is a fantastic, kinetic scramble around a pillar the two fighters are tied to, that’s corkscrewing into the ground and constantly dragging them closer together.

The book’s creators use the format cleverly too, several pages leading you from the top left corner of one page to the bottom right of the other to create huge sweeping vistas and a sense of scale that few other graphic novels recently have matched. Similarly, Haberlin and Brittenham are brave enough to answer questions but let those answers raise more questions. The very Earth-like names of the planet's inhabitants, as well as the fact they can speak English is answered enough to work but they leave room for it to be explored further in a sequel. You don't feel cheated in the slightest, but much like the best episodes of Fringe and Heroes closed some doors and opened others, Anomaly is a complete story that also sets up at least one sequel.

The world is certainly detailed enough to stand a return visit and that detail is where Anomaly plays its final ace. The book, much like many Marvel titles this year, has an Augmented Reality component to it. You download the free app, hold your smartphone or tablet over one of a series “hot” pages and watch a 3D model of a character or creature appear out of the page. Even better, you get a detailed text entry about the model, written in character by Tonni. It's an immersive, smart addition to the book and, crucially, it's a bonus rather than a crutch. You can read the whole thing without once bothering with the AR component but if you do, there's a wealth of extra information on display. Even better, the plan is for more material to be added over time. This is, of course, on top of the detailed timeline, break-down of the modern social structure in the Conglomerate and the further extracts from Tonni's journal that all close the book.

Anomaly is a huge book, with huge, sweeping ideas and a hefty price tag. But the sheer quality of art, and some of the surprising narrative choices it makes absolutely justifies the price. It has problems – Erebos the villain, in particular, is a gimmick in search of a personality – but that's a niggle in a vast book. If you're looking for something different, and have the upper body strength, Anomaly is well worth a visit. Just don’t take any robots. Trust me, it’ll be safer…