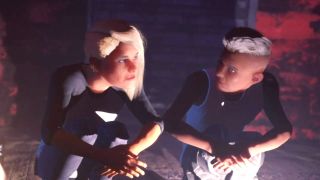 The Blackout Club is a new multiplayer horror game that feels like a cross of Stranger Things and It Follows. "Teens work together to solve a horrifying mystery" is a familiar premise, but The Blackout Club has a deceptively simple trick that could take players by surprise. It's called the Enhanced Horror System, and like any good haunted house, you have to read and agree to a lengthy legal document before they'll let you try it out. Granted, in this case it's a Terms of Service explaining why they need app permissions instead of a waiver of liability in case you have a heart attack, but it's the same energy.

Developer Question Games explains exactly how the enhanced horror system works on its website, but it's a big spoiler for some of the tricks the game pulls. It would be like if a 19th Century spiritualist told you at the start of the seance that they're going to bump the table with their knees and throw their voice to make spooky sounds. But if you're still interested in finding out how something called the Enhanced Horror System could possibly earn the coolness of its name, read on past the image.

The Blackout Club can talk to you. Like, really talk to you, either through text or a voice. At certain points in the game you can perform a ritual where you speak into your microphone, and the game may respond. It could even reveal a secret or give you an item as a reward. It isn't guaranteed to happen, but assuming you opt in, it's always a possibility.

The technical wizardry behind this feat is... hiring actors. The actors play the in-fiction roles of Voices, Gods, and Daimons, and the live interactions they have with unsuspecting players fill out The Blackout Club's story. Even if you're never spoken to personally, you'll still hear bits and pieces of other players' rituals as you return from mission.

Question Games says the Enhanced Horror System is meant to work like audience participation in live theater or stage magic. I think it has the element of surprise over those, though, because most of the time the game won't talk back. You'll think you're alone, until you realize you're not.

If you like feeling extremely unsettled, you'll want to check out some more selections from our list of the best horror games.