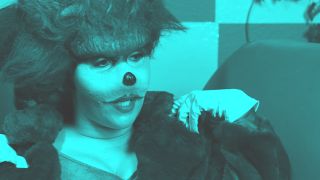 When - in the spirit of Valentine's Day - we asked our team to name their secret video game crush, we didn't specify it had to be a human. Somehow, that created a sexual safe space that admits small marsupials, rabbits, and a green Brazilian mutant. At least it didn't include a vadgehog.

Less of an issue now, but when I was younger, there was something about Crash Bandicoot that really did something to me. I know, I know, he is so orange, and well, a bandicoot, but that doesn't stop the sex appeal from oozing through the fur. He's basically a fuzzy Indiana Jones after all, unafraid to throw himself in danger's way, boulder after bounder, AND he's friends with a teenie tiny polar bear. Plus, he'd be so snuggly. If that's not boyfriend material I don't know what is. Sam Loveridge

Nothing screams BDE like a man rocking a giant geometric helmet. Like, he's so handsome he doesn't even need to show you his face. That, and there's a certain type of arm definition you only get from dragging a giant blade behind you at all times, and everyone loves the strong silent type. He's wearing a butcher's smock, which hints at some culinary talent, and if you ever need a mini-break he can, presumably, drag you into a little hell portal to get you away from the hustle and bustle. Rachel Weber

The Guildmarm in Monster Hunter 4: Ultimate

Monster Hunter games always assign you some sort of Handler to track your progress and present you with new quests, and while I love it to death, this is one area where Monster Hunter World: Iceborne really falls behind its predecessors, especially Monster Hunter 4 Ultimate. The Handler in World is nice enough, but she's kind of a spaz and she doesn't hold a candle to the Guildmarm in 4U. The Guildmarm's design is great, and even on the 3DS, her animations convey a lot of personality. More than anything, there's just something so sweet about her, between the way she wholeheartedly celebrates your successes to the way she calls you "Doodle" no matter your character's name, sex, or how many behemoths you've slain. She's also driven and has a clear goal: make it into the Wyverian Academy by becoming a researcher. This is a bittersweet crush, though, because the Guildmarm is openly smitten with somebody else: Brachydios. Austin Wood

At the risk of being put on some sort of watchlist (or, worse, my girlfriend seeing this), I have to admit there was a time when I was hopping mad for Spyro's saucy sorceress. For a late '90s platformer, Bianca was surprisingly well-formed. And I'm not talking about the polygonal bumpy bits. Perverts.

She's got attitude, she's fierce, can verbally outspar anyone, and she's got a secret heart of gold. What more could you want in a bunny-woman? She may have been massively sexed-up in later games (and gain legions of fan-artist followers in the process), but I'll always have a soft spot for Year of the Dragon's sweet, sophisticated, liable-to-step-on-your-throat-at-any-given-moment version of Bianca. Bradley Russell

Look, somebody's gotta be basic as hell and pick Tifa from Final Fantasy 7. It's inevitable: she's a cute and spunky martial artist who is probably the source of suspender fetishes in 30-somethings all around the world. What truly checks my "I will protect it" box for Tifa, though, is the way she's so irrevocably consigned to not be your number one. How can literal girl-next-door Tifa possibly compete with Aerith, the innocent, the healer, the ancient, the official No. 1 Good Girl For Her (FF7 spoiler warning) Tragically Short Life? You're free to take either Aerith or Tifa - or Yuffie or Barrett - on a date to the Gold Saucer, but the canonical choice is clear. Cloud will always be hung up on that flower girl from Midgar, and Tifa knows it. I just hope Tifa also knows that she'll always be No. 1 in our hearts. Connor Sheridan

This is already weird without me having written a word, hasn’t it? But hey, at least it’s honest. Yes, instead of more predictable choices like Blaze from Streets Of Rage, or Ellie or Chloe from Uncharted, or even Chun-Li from the very same game, I’m going for the big boisterous green thing with the gravity-defying orange barnet. My original mancrush. Er, mutantcrush. The simple truth is that pressing his buttons generates hair-raising electricity between us, and it’s a connection that shows now sign of fading as we approach our third decade together. Alright, there was a slight wobble that night on the voddie with Zangief, but we’ve moved on now. Happy Valentine’s Day, my big Brazilliant beast. Ben Wilson