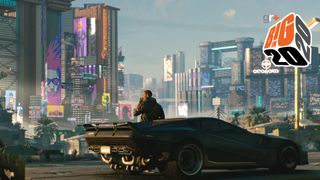 It isn't a question of if Cyberpunk 2077 is going to revolutionise the RPG, but rather a question of how drastically. With The Witcher 3: Wild Hunt, developer CD Projekt Red left what is arguably the deepest impression on the genre since The Elder Scrolls 5: Skyrim reignited our imaginations. And it certainly looks as if it is set to do it all over again in this ambitious 2020 adventure, as we set out across Night City in search of a prototype implant that is said to be the key to immortality.

And I say "looks as if" because nobody outside of the studio ecosystem has had the opportunity to get their hands on Cyberpunk 2077 just yet. Truth be told, that isn't all that surprising; CDPR handled the run-up to The Witcher 3 in a similar fashion, navigating the swelling tide of skepticism and delays with a gentle wave of walkthrough demonstrations and revealing interviews. Cast your mind back to 2014, The Witcher 3 seemed too good to be true. Until it wasn't, of course; the game set a new standard for the fantasy-RPG, one no other developer has been able to match since. CD Projekt Red is the type of studio that likes to let the final product do the talking.

What, then, will Cyberpunk 2077 have to say for itself? That's difficult to pinpoint, because the scope of this game appears to be absolutely out of control. Cyberpunk 2077 puts you in command of V, a mercenary outlaw that lives in a claustrophobic cityscape that is becoming consumed by violent turf wars. CDPR is designing Cyberpunk 2077 to give you the space to shape your adventure and to navigate the escalating tensions threatening to tear apart Night City as you should so desire. It's attempting to deliver an experience where you have the freedom to customise your character's cybernetic enhancements and skillset to your heart's content, with the game bending to breaking point to facilitate your preferred playstyle.

It's a little difficult to conceptualise, but it's here that the true impact of Cyberpunk 2077 should be measured. If this game lands as it has been pitched, it will surely set a new benchmark for immersive quest design in the RPG-space. Night City is clearly an energetic ecosystem, full of depth and detail; a space that seems to exist around you – rather than in spite of you – and it's the way in which it will intertwine with the choices that you make, and reflect back consequences earned, that will truly set it apart from anything else in the genre. For CDPR, it's a monumental undertaking, one it intends to meet head on.

Cyberpunk 2077 is the riskiest and most ambitious project in CDPR's history. The studio spent a decade exploring the carefully outlined boundaries of The Northern Kingdoms, but, with Cyberpunk, it will be diving into a property that has experimentation and innovation built into its foundational design.

Cyberpunk was established by creator Mike Pondsmith to encourage free-form play at its most fundamental level, as a conduit for enthusiastic players to explore a dense and detailed science-fiction world. It's that spirit the studio is embracing for Cyberpunk 2077.

The Witcher, on the other hand, is a series that has been naturally scoped by the presence of its iconic hero – CDPR knew where the line was, and it built one hell of a fantasy playground within it all. "Geralt actually let us narrow down the choices players had, because there are certain things that Geralt is just not going to do. We can be a lot more open with V than we could with Geralt, because we want the character that you create to be a collaboration between us and the player."

When CDPR speaks of collaboration between studio and player, it's suggesting that we will truly be given the space to role-play as V in Cyberpunk 2077. It means that the team's efforts to create a dense and detailed playing space – full of hand-crafted main and side-quests – will be actually capable of funnelling your choices out across the story and the world around you. Cyberpunk 2077 might be quick to catch the attention of anybody that puts their eyes on it, but it is the quest design that will hold it.

On the eve of the next-generation, Cyberpunk 2077 is setting its sights on reinvigorating the RPG. It's giving us an insight into what the next generation will hold for the RPG genre and, should CDPR pull this off, who knows if it'll take another generation cycle for other developers to clear the high benchmark it is sure to set.