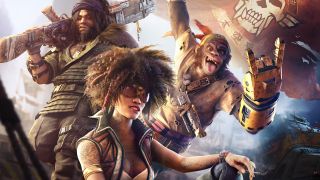 To say that I pored over the Beyond Good & Evil 2 trailer with furious intensity would be, well, entirely accurate. Pig men! Is it Pey’j? Who’s that monkey? Why is he a cockney? How well rendered are the pig hairs, and what exactly are they eating in that Chinese restaurant? Pig? Monkey? Are we looking at a Journey to the West-themed story here, a la Enslaved?

And you know what? Initially I was slightly deflated. The pig isn’t Pey’j. Jade keeps repeatedly not turning up. The teeming, multicultural, alien city is an astounding sight to behold as we soar and roll through its Blade-Runner-meets-ancient-world skies, but it doesn’t quite have the same vibe as Hillys. I was, frankly, being that nostalgic idiot we can all be at times, who wants the return of The Old Thing We Liked to deliver exactly the same experience we had the first time around, even though we know that that’s actually existentially impossible.

But then I watched the rest of the trailer. I then I listened to director Michel Ancel’s brief explanation of the game’s prequel scenario. And then I watch the trailer again. And I am now 100% sold. Because while a sequel – however swiftly delivered, or in this case 14-years delayed – can never provide the same emotional experience of the original by repeating what went before, if it changes enough and reinvents its predecessor’s essence in a fresh, striking way, it can absolutely tap into the same feeling with a brand new vitality. And I think that’s absolutely what Beyond Good and Evil 2 is primed to do.

If you played the 2003 original, you’ll know that the game’s world – a teeming, vibrant melting pot of anthropomorphic animals, humans, abstracted multinational cultures, verdant countryside, and hard, industrial urbanity – is one of the most vital and affecting Ubisoft has ever created. It’s made of the same, perfect balance of world-building conceits as Star Wars, in fact. Hillys is all at once bizarre, but makes total sense. It’s eclectic and alien, but is totally functional. It has vast, cosmic sweep, but is made of intricate, lived in, street-level humanity. And it doesn’t explain anything, because it never has to. It is a place you will be captivated by, which you’ll inhabit immediately and completely, and which you’ll want to know everything about, on both a grand and personal scale. As another member of the GR+ staff has just told me, it was a world in which he’d often just stand, and stare at the stars, and wonder. And not just because he got XP for doing so.

Beyond Good and Evil 2, with its vast, space-faring scale and focus on the exploration of the universe’s many alien worlds, feels like the logical next step in feeding and satiating that obsession. All of the vital BGE essence is there in the trailer, from the spellbinding, epic sweep of vast spaceships hovering over Old-World-meets-high-tech cities, to the altogether smaller – but just as captivating – scale of perfectly-rendered dumplings in worn-out, dingy Chinese restaurants. But it’s not just the sheer rightness of the world-building that has me hooked, but rather the hints Ancel has given about where the story is going to go.

With Beyond Good and Evil 2 we seem to have something that feels able to justify gaming’s quest for deeper significance without labouring the heaviness at all. The game’s world - with all its awe-inspiring scale and grounded, human detail - is obviously the first step in realising such a goal. But it’s Ancel’s comments about the particular details of the prequel scenario, the narrative and thematic content that will be built upon that arresting foundation, that really have me excited.

We’re going to get a proper explanation of where the animal-people came from, as we explore their origins as human-created, genetically engineered hybrids, bred for exploitation before attaining some early semblance of freedom. We’re going to explore the many different cultures and societies they’ve created across the universe, and how they interact with each other, as well as the various flavours of humankind that float about the place. We’re going to get into the experience of these engineered, variously put-upon races as they find their way in the universe, coming together, clashing, and exploring amid all their common ground and differences. And there are already many signs in the Beyond Good and Evil 2 trailer that Ancel and his team are treating this stuff with great care for detail, nuance, and respect.

Just look at how much is going on in that restaurant conversation alone. There’s resentful, insulting talk of ‘domestication’. The statement is a clear sign of tension between species, but is also packed with implicit, cultural anger at the hybrids’ origins, and speaks volumes about the current state of their society. It does all of this in a single word. Then there’s the physical storytelling in the pig’s physicality. Those scars on his hulking body didn’t come from nowhere. Life has been hard. Life has been violent, and potentially cruel. Maybe those marks were inflicted previous to his current life of freedom, or perhaps physical hardship has remained a theme despite his present-day autonomy.

And perhaps most affecting, there’s the matter-of-fact revelation that the pigs – and presumably other hybrid races – have a sense of divinity, and a structured religious belief, despite knowing that they were artificially created by humans for specific commercial and logistical purposes. They know the cynical, functional truth of their origin story, but they still believe in something greater. The more you think about that one, the more profound, heartbreaking, and also really downright beautiful it becomes. Beyond Good and Evil 2 clearly has a lot to say, about people, about culture, about societal evolution, about the different ways we get on with each other or not, and about the effects of all of that, long-term and short. It’s already saying a lot of these things, in very few words, in a three-minute reveal trailer. It’s doing so without labouring the point, in a Technicolor world of wise-cracking chimps.

I don’t know exactly how Beyond Good and Evil 2 is going to play. I don’t know how far its systemic style is going to shift from that of the original game, but if pushed, I’d guess ‘Quite a way’. Ancel has said that the action in the trailer is indicative of gameplay, so we can already expect airborne vehicular action, kinetic traversal and platforming (enhanced by grapples and jetpacks), and a great deal of exploration, space-based and quite possibly gigantically open-world as well. And we also know that the game works online. My dream right now is a multiplayer Mass Effect exploring every far flung and intimate aspect of Ancel’s Fifth Element meets ancient cultural history, space monkey universe. And I don’t think I’m necessarily being too ambitious in hoping for that. But however it turns out, that universe is the one definite we absolutely do have. And as long as we have that, we have the potential for one of the most fun and affecting games of the near future, full of wonder and weight in equal measure. In other words: the foundation for a perfectly fitting sequel to Beyond Good & Evil.