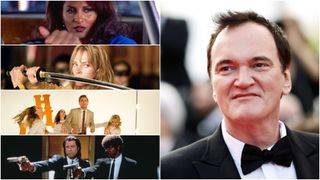 Few directors working today are as critically celebrated as Quentin Tarantino. While the filmmaker may make blood-splattered movies with terrifying characters who have a penchant for using foul language, critics lap up every release from the auteur with open arms.

Tarantino's latest effort, Once Upon a Time... in Hollywood, has received the same applause across the board. Our critic, Jordan Farely, described the movie as Tarantino's "most heartfelt and emotionally mature work since Jackie Brown." Considering that Kill Bill, Inglorious Basterds, and Django Unchained have all been released since Jackie Brown, that's some high praise.

To celebrate the new release, which is in US theatres now and comes to UK cinemas August 14, the Total Film team has ranked every Tarantino-directed movie to date. Countdown the best Quentin Tarantino movies with us below.

The black sheep of Tarantino’s celebrated CV is, by design, a fairly disposable slice of exploitation cinema. Kurt Russell stars as Stuntman Mike, a psychotic serial killer who murders young women by using his “100% death proof” stunt car to cause horrific crashes. Originally released in the Grindhouse double bill with Robert Rodriguez’s Planet Terror, the bulk is Tarantino at his most prolix, as his characters (including the director himself, in a typically cringesome cameo) endlessly waffle about nothing of any real consequence in cars and bars – the extended cut even finding time for Mike to get a lap dance. But the film kicks into gear for the ferocious climactic car chase, before a hilariously abrupt, yet deeply satisfying, final. Jordan Farley

Despite Tarantino saying that the Kill Bill movies are a singular entity, cinema-goers still had to buy two tickets to see both parts. So, with that in mind, it only seems fair to rank the two volumes separately. The second part of The Bride’s revenge tale acts as an origin story for the kung fu-fighting, ass-kicking, leather suit-wearing, three inch-punching heroin (played ferociously by Uma Thurman in both movies). In Volume 2, we finally come to understand her relationship with the eponymous Bill (David Carradine). However, the action sequences here are somewhat less thrilling than in Volume 1 - no katana showdowns or animated sequences - and the movie spends a little too much time with the legendary martial arts master Pai Mei, who teaches The Bride the infamous Five Point Palm Exploding Heart Technique. Still, the final showdown between Bill and The Bride is a masterclass in direction from Tarantino, who ratchets up the tension between the two. Jack Shepherd

Effectively Tarantino’s version of an Agatha Christie story, The Hateful Eight sees a ragtag bunch of characters holed up in an isolated location, as truths are gradually revealed and twists emerge. Set in 1987 Wyoming during a blizzard, the action takes place in Minnie’s Haberdashery, as tensions mount between a cast of Tarantino regulars (Samuel L. Jackson, Kurt Russell, Tim Roth, Michael Madsen) and one-offs who perfectly nail the tone (Jennifer Jason Leigh, Walton Goggins). Tarantino shot on 75mm, meaning that even in the confined setting it feels hugely cinematic, and an original score by Ennio Morricone adds to that old-school western heft. Yes, it’s very long (168 minutes, and that’s not even the roadshow version), but in the company of these characters, time flies. Matt Maytum

Django Unchained reunites the director with Christopher Waltz for another wonderfully realised genre movie. This one centres on the former slave Django (Jamie Foxx), who gets taken under the wing of dentist-turned-bounty hunter, Dr. King Schultz (Waltz). The duo soon go searching for Django's wife, Broomhilda, who they discover is now owned by the terrifying Calvin J. Candie, proprietor of the Candyland plantation. Leonardo DiCaprio's Candie is thrilling to watch, with the actor giving the Mandingo fighting lover a raw and unpredictable energy - Tarantino has a knack for getting career best performances from even the most seasoned actors. Unfortunately, one person Tarantino cannot help is himself; during the third act, the director’s heavy-handed cameo is particularly galling. Jack Shepherd

Tarantino famously said that he would not have made the Second World War satire Inglorious Basterds if he did not find the perfect actor to play Hans Landa, the bilingual "Jew Hunter" and the movie's primary antagonist. Step forward Christoph Waltz, whose acting chops were more than up for the task. That a film containing such a magnificent performance ranks so low on this list is testament to Tarantino’s skill as both a writer and director. Inglorious Basterds, which - in typical Tarantino style - contains multiple loosely related plot strands that come beautifully together during the final moments of the movie, also features excellent turns by Diane Kruger as the undercover actress Bridget von Hammersmark and Brad Pitt as the obnoxious Aldo "The Apache" Raine, leader of The Basterds. Jack Shepherd

While the dust has yet to settle on Tarantino’s allegedly penultimate film, the movie-obsessed movie-maker’s most personal project yet is undoubtedly his best for at least 15 years. Set in 1969 Hollywood, at the precipice of great change for the industry, much of the film’s pleasure comes from simply hanging out with lead trio Rick Dalton (Leonardo DiCaprio), Cliff Booth (Brad Pitt) and Sharon Tate (Margot Robbie) as they go about their day, acting in naff TV westerns, repairing TV aerials or popping to the cinema. It occasionally veers into indulgence as a consequence, but there are scenes here that see QT back at the height of his powers, while the film’s controversial final act is simultaneously the most outrageous, irresponsible and sincerely sweet thing Tarantino has ever committed to film. Jordan Farley

The beautifully choreographed, Fists of Fury-influenced climactic fight; the spikey, austere dialogue; Uma Thurman’s career best performance; the unrelenting pace of the whole thing. Kill Bill Volume 1 was never going to be topped by Volume 2. The first instalment introduced us to The Bride and the Deadly Viper Assassination Squad, all while keeping Bill hidden away in the shadows. As with all of Tarantino’s movies, Volume 1 has more unforgettable scenes than most directors accumulate throughout their entire careers (The Bride being shot, "wiggle your big toe," that final katana fight). No wonder it’s so beloved. Jack Shepherd

The only true adaptation Tarantino has done thus far, Jackie Brown turns Elmore Leonard’s novel Rum Punch into a Pam Grier vehicle. While the movie is often overlooked by the director's fans (mainly because it's sandwiched between Pulp Fiction and Kill Bill within Tarantino’s filmography), Jackie Brown remains one of the director’s best and most controversial movies (Spike Lee has spoken out about the Tarantino joint on multiple occasions for its excessive use of the N-word). Grier's career revitalising central performance as the eponymous money-smuggling aeroplane stewardess grounds the movie's twisty, double crossing narrative. Then, of course, there are the supporting actors Michael Keaton, Robert De Niro and Samuel L. Jackson, whose typically great performances help make Tarantino's homage to blaxploitation a classic. Jack Shepherd

The movie that started it all. Tarantino's debut was a fully formed marvel; a heist movie that could have leaned on cliches, but instead delivered one of the freshest takes on the genre ever put to celluloid. Reservoir Dogs starts with eight men sitting around a table, talking about Madonna and planning a robbery. Without ever seeing the actual heist-gone-wrong (Tarantino hadn't the budget), the rest of the movie takes place after the event as the group try to work out who set them up. The majority of QT hallmarks are there - the music, the twists, the humour, the gore - and, even after nearly three decades in the business, the director has only beaten his debut once... Jack Shepherd

Still the Big Kahuna of Tarantino’s oeuvre... Proving Reservoir Dogs was no accident, Pulp Fiction marked out the writer/director as a singular voice in cinema, and further established his trademarks: twisty narrative structure delivered with panache? Yep. A fading talent revitalised? Hello John Travolta. Eclectic, unmissable soundtrack? You got it. Essentially the story of hitmen Vincent Vega (John Travolta) and Jules Winnfield (Samuel L. Jackson), gangster’s wife Mia Wallace (Uma Thurman) and boxer Butch Coolidge (Bruce Willis), Pulp Fiction still feels as electrifyingly cool as it did 25 years ago. It became instantly iconic – from the poster, to the dance sequence, to the delightfully meandering dialogue – but it’s a pop-culture classic that’s stood the test of time. Burger talk would never be the same again. Matt Maytum

For more Tarantino goodness, pick up the new issue of Total Film magazine, which features an entire supplement dedicated to the director. On shelves now.