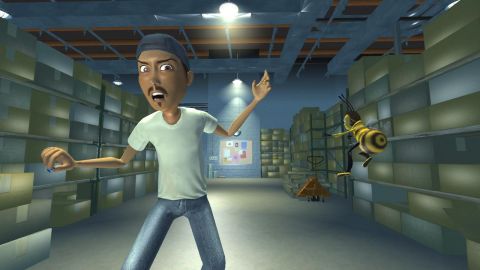 For all of the hubbub over shovelware and uninspired Wii ports of last-gen games, it's somewhat refreshing to see a Wii-specific version of a multiplatform release that significantly pales in comparison to the other iterations. Wait, did we say refreshing? We meant baffling.

Indeed, the Wii version of Bee Movie Game, developed by Smart Bomb Interactive (the other console versions came from Beenox), is a different game than its brethren, though the difference comes not in the concept but the execution. You'll still navigate rainy streets, pollinate flowers, annoy humans, and avoid becoming windshield fodder, but each mission follows a noticeably different structure, and all are almost uniformly easier than in the Beenox game. You get the sense that both companies followed the same basic template, but Smart Bomb opted for a simpler interpretation of the material.

Freelance writer for GamesRadar and several other gaming and tech publications, including Official Xbox Magazine, Nintendo Power, Mac|Life, @Gamer, and PlayStation: The Official Magazine. Visit my work blog at http://andrewhayward.org.