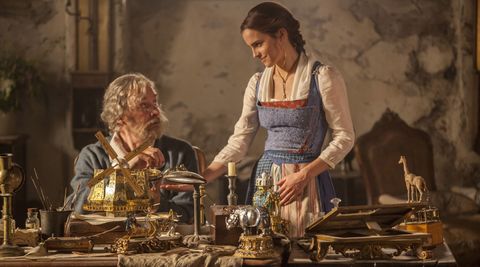 A delightful live-action recreation of a familiar fable. You’ve seen it before, but its spirit and pizzaz are pretty much irresistible.

Following Maleficent, Cinderella and The Jungle Book, Disney continues its run of live-action adaps of its animated back catalogue with a slavishly faithful and lavishly mounted rendering of Beauty and the Beast. It might just be the studio’s best re-do yet. A nostalgia rush for viewers over a certain age, and magical enough in its own right to convert newcomers, it’s a roaring success.

Clinging closely to the template of the 1991 Best Picture nominee, its story, characters and songs will feel potently familiar to anyone who’s seen the Mouse House’s first crack at the tale  as old as time. While it’s a good 40 minutes longer than the animation, any additions are well-judged by director Bill Condon (Dreamgirls, The Twilight Saga: Breaking Dawn – Part 1 and 2), and nothing new distracts from the familiar formula.

A slightly revised prologue sees the vain prince (Dan Stevens) transformed into the furry fiend by a wandering enchantress. He’s condemned to a lifetime of isolation in his castle – unless he can find true love before the last petal wilts from the rose that’s counting down his fate. In a nearby village, meanwhile, Belle (Emma Watson) feels like an outcast for reading books and dreaming bigger than the small-minded locals.

Of those aforementioned additions to the plot, most are minor tweaks centred on Belle, increasing the independence she already had in the cartoon compared to some other Disney heroines (at one point, Watson’s Belle definitively states, “I’m not  a princess!”).

Devising inventions and hatching escape plans, Belle is also given a little more backstory, which adds to the foundation of her relationship with the Beast. Watson’s natural strength and sweetness fit perfectly with the role, and she meets the role’s musical demands.

Stevens, who looks alarmingly like the cartoon’s prince, gives the Beast a soulful voice in a mo-capped performance. If the CGI isn’t always perfect (it’s hard to shake the feeling that the tech might have been more up to the challenge in a couple of years’ time), it’s good enough to prevent any major distractions, even in the centrepiece ballroom scene.

Gaston, as played by Luke Evans, is again a scene-pincher. With biceps (and arrogance) to spare, Evans is more hissably cruel than the cartoon’s doltish hunter Josh Gad, meanwhile, adds layers to Gaston’s sycophantic right-hand-man Le Fou. The supporting cast are, in general, a hoot, mostly composed of the Beast’s enchanted homewares: servants having assumed the form of various ornaments or pieces of furniture while their master is under the spell.

Present and correct from the cartoon, there’s Cogsworth the clock (voiced by Ian McKellen, a standout), candelabra Lumière (Ewan McGregor) and tea-spurting Mrs. Potts (Emma Thompson), and this version adds Stanley Tucci as a harpsichord. All impressively digitally rendered, they’re part of a large supporting cast that almost steals the limelight from Belle and Beast, especially as the rose-petal countdown feels more urgent for all involved here.

Even McGregor’s “Maybeee she iz zee one” French accent feels less egregious in context: these performances are all panto-broad, adding to the film’s Broadway atmosphere. Which brings us to the songs...

A huge benefit for this adaptation is that it gets to revisit Alan Menken and Howard Ashman’s songs. Once again, ‘Be Our Guest’ is a highlight,  as Lumière and co tempt Belle to stay  for dinner via a Busby Berkeley-style song-and-dance routine, but there’s also joy in seeing Belle and Gaston’s numbers given new life (and you’ll be humming them for days afterwards).

Some new verses are weaved in to extend classic songs, and a couple of completely new tracks sit comfortably alongside the old favourites, though only time will tell if they have the same staying power.

Familiarity can be a double-edged sword, but it plays in Beauty and the Beast’s favour. You’ve seen this film before, but when it’s redone with such warmth and craft (Jacqueline Durran’s exquisite costumes deserving special mention), it’s impossible not to be won over anew. This is finely tuned entertainment that should satisfy all quarters of the audience. There’s enough darkness to give it a bit of edge, but plenty of laughs for levity, and also moments sure to elicit tears.

One minor gripe though – it feels like a trick was missed by not releasing it at Christmas. Presumably wanting to avoid clashing with Rogue One, the film’s snow-shrouded castle, musical numbers and all-round family friendliness would’ve made for an ideal festive treat. Still, it’s hard to imagine this lovely fairytale is going to have to beg for guests at any time of the year.

Beauty and the Beast

A delightful live-action recreation of a familiar fable. You’ve seen it before, but its spirit and pizzaz are pretty much irresistible.