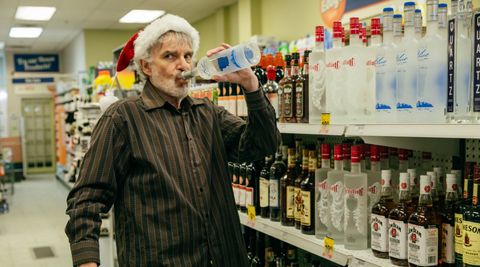 The intent is there, but Bad Santa 2 is a tired sequel that lacks the first film’s festive freshness.

Thirteen years ago on from Bad Santa, Billy Bob Thornton’s foul-mouthed low-life Willie returns, as pee-and-puke stained as ever – not to mention politically incorrect, misanthropic and just nasty. When we meet him again, Willie’s at such a low ebb he tries to stick his head in the (electric!) oven.

Paid a visit by his old partner-in-crime Marcus (Tony Cox), he gets sucked into a Chicago-set mission to rob $2 million for a homeless charity run by Christina Hendricks’ recovering alcoholic. Well, it is Christmas, after all. Joining them is Willie’s white-trash mother Sunny (Kathy Bates), who – naturally – Willie despises.

The big mistake this Mark Waters-directed sequel makes is sacrificing the 2004 original’s underlying heart, which was rooted in the uneasy bond between Willie and the gormless snot-nosed kid Thurman. The character returns (again played by Brett Kelly), now all grown up and working in a sandwich store, but he feels shoehorned in.

True, Hendricks has fun with her role as a good girl with a bad streak, while Shauna Cross and Johnny Rosenthal’s script fires off a few zingers. But with Thornton surprisingly disengaged and the robbery plot formulaic, it’s a limp dick of a sequel.

The intent is there, but Bad Santa 2 is a tired sequel that lacks the first film’s festive freshness.