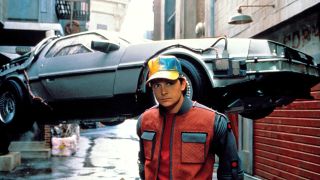 Chances are, if you’ve ever heard the name DeLorean before, it’s because of the famous time-travelling car from Back to the Future and not because of the vehicle's creator, John DeLorean, and his ruinous brushes with FBI cocaine stings and million-dollar embezzlements. A new documentary, Framing John DeLorean, starring Alec Baldwin in the eponymous role, is going some way to change that. The movie shows how the DeLorean car proved to be one of the most disastrous automotive business ventures of the 20th century. One of the people who had input on the script was Back to the Future co-writer Bob Gale – a man partly responsible for making the car far more than just a messy footnote in the history of the 1980s American car industry.

That less than savoury history – full of drugs, fraud and morally dubious business decisions – might not be as wholesome as the Back To The Future trilogy, but it’s exactly what lead to the car’s inclusion. The scandal featured prominently in the news during the first movie’s production and, according to the movie’s co-writer Bob Gale, it was one of the key reasons it eventually replaced the original choice of time machine: an... old fridge?

“We wrote two drafts of Back to the Future in 1980 and 1981,” explains Gale over the phone. “The time machine was built into an old refrigerator, and Doc had to carry it around on the back of a pickup truck.” While that’s obviously way less cool than a stainless steel sports car, it was actually for more practical reasons that Gale and director Robert Zemeckis ultimately went with wheels. “In 1984, we get the movie into pre-production,” says Gale, “and the director, Bob Zemeckis, is now looking at the script not as a work of storytelling, but as a blueprint for a movie. Now he’s got his practical director’s hat on, and he’s trying to figure out: ‘How am I going to film all this stuff?’ One morning, he came into the office, and he said, ‘Hey, Bob, wouldn’t it make more sense if Doc Brown had built the time machine into a car? Then it would be mobile and we wouldn’t have to carry it around on this pickup truck.’”

It seems amazing that such a famous and iconic part of movie history was simply something that “made the logistics a lot easier”. Incredibly, as well, it was all just a matter of timing. Gale explains: “This was in July or August in 1984, and John DeLorean happened to be on trial for cocaine trafficking. The story was that he made a cocaine deal, the proceeds for which he was going to use to buoy up his car company that was in serious financial trouble.” As well as bringing the car to Gale and Zemeckis’ attention, John DeLorean’s “bad-boy image” gave it a sense of notoriety, making the vehicle “a little bit dangerous and cool”. That edged out a potential rival, a Mercedes gull-wing car, also around at the time, that “didn’t have the cool factor that the DeLorean had,” according to Gale. Those wing doors were key not only because “it kind of says ‘future, future, future” but also helped the car look more like a UFO when it initially jumps back to 1955 and scares a local family. “The whole gag at the Peabody farm, where they think it looks like a spaceship?” Gale points out. “That’s obviously done by the gull-wing doors”.

The DeLorean went on to become an integral part of the movie. The need to hit 88 miles per hour and for roads (whether you needed them or not) helped shaped the sequels and stemmed both from the car and the “setup of rules that you do in good storytelling,” says Gale. “We had to come up with a logic as to how the DeLorean could travel through time. We always thought of a nuclear reaction as a key element and, in fact, in the old, old drafts, they had to take the refrigerator time machine to a nuclear test site and harness the energy from an atomic bomb test in Nevada.” Let that sink in for a moment: at one point in time, Marty McFly and Doc Brown could have ‘nuked the fridge’, twenty years before Indiana Jones even considered the idea in Kingdom of the Crystal Skull. Fortunately, says Gale, “that was expensive, so we ended up not doing it.”

The DeLorean, then, shaped one of Hollywood’s greatest movie franchises just as much as Zemeckis, Gale, Michael J Fox or Christopher Lloyd. Although perhaps the most amazing thing Gale reveals is this bit of trivia: the DeLorean’s speedometer only goes up to 85 miles an hour. Wait, what? “It was an underpowered car,” Gale says. “When we finally got our hands on a DeLorean, we discovered that the stock speedometer only went up to 85 miles an hour [laughs]”. Turns out those crucial shots of the all-important speed were faked, at least to begin with. “I don’t know whether we shot the shots you see of the speedometer in a different car, or if we switched out the stock speedometer, for one that went up higher,” Gale says. It was easily fixed in the long run though: “The stock car had only a six-cylinder engine in it [and] when we went back to do the sequels we had our guys put eight-cylinder engines in so that we could get it going faster.”