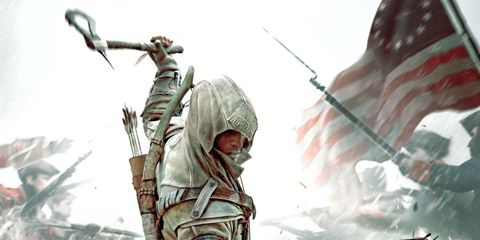 With its fusion of Matrix-like science-fiction and painstaking attention to historic detail, the Assassin’s Creed franchise is one of the most popular game series in some time. Assassin’s Creed III brings the trilogy to a close. It’s a sequel full of great gameplay improvements and some fantastic moments, but it’s also not without its hiccups.

As Desmond Miles, you’re part of a team of modern-day assassins fighting to stop the villainous Templars (masquerading as the Abstergo Corporation) from achieving their centuries-long plans for world domination. Desmond has been preparing for the ultimate showdown in 2012 by jumping into the Animus, a machine that allows him to tap into the memories of his ancestors to relive their experiences. This quest brings him to New England, where he dives into the memories of Ratohnhake:ton (known as Connor), a half-Native American, half-English warrior. The time is the 1770s, the locale is Colonial Boston, and there’s restlessness in the air. War is about to erupt, and Connor is part of the spark that will ignite the American Revolution.

As is the case with past games, Assassin’s Creed III is a real beauty. Although the cutscenes show off a great deal of detail, it’s the subtleties that really highlight its aesthetically appealing style. As Connor climbs a tree in the midst of the wilderness during a frosty New England winter--this sequel features weather and seasonal changes--you can’t help but to be taken in by how gorgeously stark the blanched terrain looks. When you climb atop a massive cathedral to survey the land in one of the franchise’s trademark synchronization points, it’s awe-inspiring.

AC3’s gameplay has introduced new wrinkles to the now-familiar formula; free-running is one of the biggest improvements, as it has now been streamlined into one button. As a result of other tweaks, the number of erroneous leaps and swan dives is dramatically reduced, so you’re consistently engaged and focused. It also feeds into combat, since you can run down a busy street and hack down a guard without breaking your stride.

Speaking of combat, AC3’s brawling is fantastic. There are no on-screen combo tickers a la most button-mashing action games like God of War, but it has that sense of free flow in its battles. Fights are fluid and responsive, thanks to great visual cues--a successful counter or blocked attack displays as a few seconds of slow motion--that helps you decide whether to disarm, shove, or kill an attacker. It supplements the excellent free-running wonderfully, and provides a real thrill once you’ve built up a pile of Redcoat corpses.

AC3 also takes a excellent new tack on terrain. With a move out of the typical urban locale into the Frontier, a sprawling chunk of wilderness, the game shows off a real maturity in taking familiar gameplay and grafting it onto a new and initially unfamiliar locale. Once you grasp the basics, you’ll be free-running through tree tops with the same ease that you’d run across rooftops. And while you’ll still encounter guards out in the woods, you’ll mostly be entrenched in hunting wild animals, which you can then process for profitable parts and fur. The game also features a naval segment, which works well and is quite fun to play. There’s a real intensity to steering a vessel and lining up just the right cannonball shots as an enemy fleet approaches.

However, for the numerous new elements that make Assassin’s Creed III an engaging experience, there are others that heavily undermine it. Since Assassin’s Creed II bowed in 2009, Ubisoft has implemented more collectibles and more economic opportunities. 2011's AC: Revelations suffered from “feature bloat” and an excess of trite filler. AC3’s biggest shortcoming is that it sags heavily with those same features, and fails to organically tie them into Connor’s crusade.

In past games, the economy felt like a far more natural and necessary growth process. Connor’s homestead (AC3’s version of prior games’ villas) allows you to recruit settlers of differing skillsets--fur trappers, lumberjacks, artisans--to help craft objects, which you can send out via convoy to vendors in Boston. However, it’s an unwieldy system that’s not particularly fun or engaging, and frankly, you can easily clear the game without much help from side income. Instead, the homestead feels like an optional feature rather than an important segment of gameplay you’ll actively want to cultivate. It’s a hugely missed opportunity.

Also, the menus are also cumbersome to navigate, which may cause you to miss other opportunities. In order to do a task as simple as sending assassin recruits out on missions to earn experience (something the game fails to mention), you’ll have to dive into a number of submenus to pull it up. It’s a clunky and convoluted system that takes fun side content and renders it so obscured that you’ll likely skip through a great deal of it on your way to thwarting the Templars.

Another issue facing AC3 is its pacing. The in-Animus tale is a rather interesting one that’s full of intrigue and plot twists. Although it takes hours before Connor finally dons the trademark white assassin’s hood, it’s a fun juxtaposition of historical figures and Forrest Gump-like embellishment, as well as some unexpected moments of social commentary about America. It’s engaging, but at times, the overly dynamic nature of the world undermines it. If you’re interested in slaying some Templars, you’ll have to fight to avoid the numerous side quests that seem to fly around in your face.

It’s hard to stay focused on your story mission when a dynamic “stop the Redcoats from openly executing a group of people on the street” moment spawns a few feet away from Connor. Other open world games do a better job of keeping dynamic (and less morally taxing) moments on the periphery as you’re lasering in on the task at hand. It also completely breaks up the flow of gameplay, and negatively affects your ability to follow a coherent plotline.

Also, while the game may get plenty of post-launch patching, it’s quite buggy as of release day. At times, the wanted signs that you can tear down to decrease notoriety will show up on a map, yet be unavailable to destroy. On rare occasions, side missions disappear from your map when you arrive at them. AI problems will force you to repeat the same mission several times. None of these glitches are game-breaking, but they’re numerous enough to bear mentioning.

But arguably, the worst element of Assassin’s Creed III is how Desmond’s tale wraps around Connor’s. At points, Desmond’s banter is entertaining; however, all too often it comes off incoherent. These sections of the game compare poorly to 1700s America, and you’ll be itching to return to that setting whenever you’re bounced out of it. Plus, after all of the cliffhanger endings of past games, the payoff for Desmond falls flatter than you’d hope for.

While the past two games introduced--then refined--multiplayer for the series, the new additions of domination and Wolfpack modes add even more satisfying team-ups to the standard deathmatch and team deathmatch of past games. Domination puts a great spin on the usual “camp out at a node point to protect it” by using the series’ emphasis on social blending to cling to a spot for your team. Wolfpack is a four-person co-op assassination mode that resembles horde mode in other multiplayer games. It’s thrilling to pull off a four-person simultaneous assassination and watch your kills in slow motion. Both modes make for great additions to a fun multiplayer game.

Overall, Assassin’s Creed III is a fun and thrilling wrap-up for the series. While it has its share of wonky sections--it’s bloated with too many features and collectibles, its pacing is off, and the Desmond sections fall short of expectations--it truly captures the thrills that have made the series so successful. The improvements to free-running, a sophisticated and well-realized combat system, and a gorgeous new rural playground are all phenomenal updates to the gameplay. Its new multiplayer features insure that there’s content worth coming back to after you’ve slain the final villain. Assassin’s Creed III is uneven in its execution, but it’s a journey that’s still well worth taking.