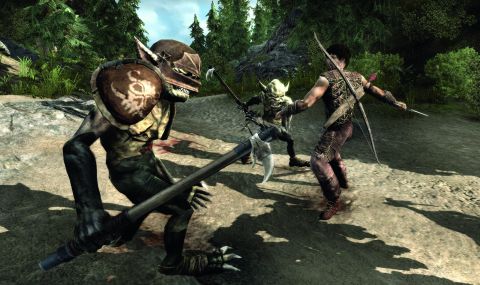 There’s a brilliant lack of romance and sentimentality to the opening scene of ArcaniA. You’re a farmer who doesn’t so much dream of marrying his girlfriend as assume she’ll say yes once you’ve done a few quests for her dad. She’s hiding the fact that she’s already pregnant while you lie about completing quests, and as you’re schooled in the game’s combat system you get a flavor for the European no-nonsense humor that underpins an otherwise deadpan, dreadfully earnest take on the fantasy genre.

From the rats to the goblins, from the swords to the fireballs, this is what we shall call a ‘classic’ fantasy world which actually gains something from the odd characters and (to be honest) uncomfortable translation. It helps you to suspend your disbelief and enjoy the indefinably alien world.

Sadly, the rest of the game is a lot more familiar, in a Two Worlds kind of way. Combat is a combination of melee, archery and magic. Although there’s obviously an element of stats, you’ll be required to perform well-timed rolls and observe your enemy’s movement if you’re going to survive a battle with even the humble bloodflies.

Magic – as we all well know – comes in three different flavors: fire, which non-surprisingly burns the troll you’re fighting after the initial damage; cold, which slows enemies for a long time; and electricity, which completely paralyzes your unfortunate foe for a much shorter time. As you develop through the skill trees, you begin to realize that the future doesn’t hold much in the way of game-changing powers for your hero – it’s longer chains, stronger attacks, and not much beyond. It’s still progress, but it’s not as satisfying as it could be.

A bigger problem is that during that skill-based combat, the lock-on camera is out of your control. In a close-up fight, you dramatically zoom in on the creature you’re fighting, from an unnecessary top-down view. That would be fair enough if creatures didn’t come in gangs of three as standard – and you’re expected to react to the actions of the creatures you can no longer see. It completely ruins combat, almost as much as the ease with which you can carelessly die – which, coupled with the infrequent checkpointing and autosaving, leads to a grinding sense of repetition.

Gothic has traditionally been a PC title, and although developer Spellbound has included radial menus to make console players feel at home, this is still a pretty poor conversion and it needs the PC staples of quick-saves, scalable graphics and a mouse to be worth the asking price. If the Gothic series is ever going to be a success on console, Spellbound has much to learn.

If you'd like to see more articles from Xbox World 360, you can get a subscription here.