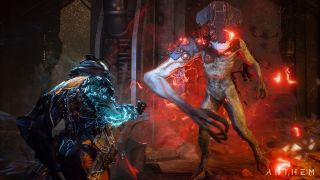 According to multiple player accounts, the rarest endgame guns in Anthem currently deal less damage than the level one guns that you get for free when you start the game. This appears to be due to a difficulty scaling issue which causes low-level gear to deal inordinately more damage than high-level gear, despite the latter showing dramatically higher damage numbers.

Reddit user YeetLordSupreme posted about this issue earlier today after finding that their level one Defender rifle could down a Scar enemy in fewer shots than their level 45 masterwork-grade Ralner's Blaze. Reddit user beatpeet42 also shared a GIF of the damage abnormality in action:

As you can see, both weapons deplete the Scar Scout's shield in three shots, which is strange enough already considering the rarity and power gap between them. Stranger still is that while the Ralners Blaze ostensibly deals 1,442 damage per shot and the Defender deals a mere 238, looking at the actual health bar on the Scar Scout, it's clear that the Defender is dealing more damage per shot.

The original Reddit post has since received dozens of comments from players referencing multiple weapons and scenarios, all of them consistent with the stilted damage findings. Another Reddit user, takeshikun, shared another GIF showing a common- and epic-grade Defender rifle side-by-side:

BioWare technical design director Brenon Holmes also commented on the post, saying, "We'll need to investigate this, scaling systems are supposed to allow low level players to play with high level players to be effective against high level enemies.This is not intended, something ain't right there."

I couldn't have said it better myself: something ain't right. This balance bug basically renders endgame gear, or at least endgame guns, completely worthless. Sure, it doesn't technically affect the moment-to-moment mechanics, but it totally kills the progression side of the game. Anthem is a loot game at heart, so if the loot isn't worth chasing - read: if the loot literally doesn't do anything - then the game really isn't worth playing. Here's hoping this is fixed sooner rather than later.