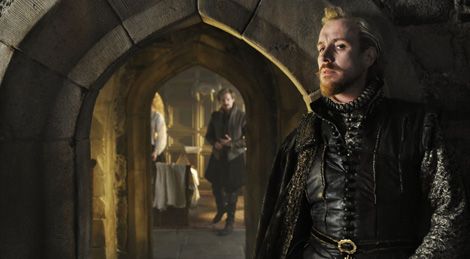 Following his Dickens oration in Clint Eastwood’s Hereafter , he pops up here to deliver a deep-throated lecture on “our Shakespeare’s” importance, before branding him a big old fake. “And yet, and yet…” he rumbles.

“And yet…” is Anonymous ’ cue to jet off into conspiracy-smitten waters, arguing that the 17th Earl of Oxford (Rhys Ifans) was the actual author of Shakespeare’s plays, the real Will (Rafe Spall) was a bratty buffoon who could barely spell his own name, and Elizabeth I gave blow jobs.

Needless to say, Shakespeare purists will have their daggers drawn for Anonymous .

Lending Roland Emmerich’s wacky enterprise a shrewd aura of legitimacy, the quality Brit cast manage not to snicker into their dog collars (Ifans makes a dashing earl, while Vanessa Redgrave gets her crone on as the brown-toothed queen) and there’s some lovely staging of Shakespearean verse.

As for whether the anti-Will brigade are right or wrong, this won’t serve their cause – the jaw keeps dropping at the daftness on display.

Anonymous misses a trick, too. Spall’s comic turn sits awkwardly beside the rest of the cast, but had the whole film been played like that, it would have made a genius feature-length episode of Blackadder . If only, if only…