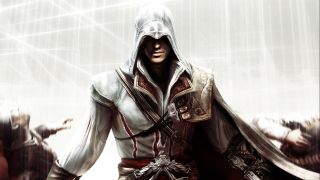 If there just wasn't enough Creed in your 2016 then it looks like Ubi is going to make up for lost time this year. With only the Assassin's Creed movie out last year, the franchise has been peacefully hiding out in a haystack, but a Reddit AMA with Aymar Azaiza, head of content for AC, has revealed big plans. An Assassin's Creed TV show is on the way. *insert eagle cry here*

He's not given much away - like, nothing - but when someone asked if he could tell us more about the TV show project, Azaiza had the following to say. "Nope. It's like the movie guys, we take our time, to get sure we deliver something we can be proud of, but if you wander[sic] if it's on our plan... YES." Back in November, Reuters reported that at a news briefing Ubi chairman Yves Guillemot had said that the company was in talks with Netflix over a series so I'm putting two and two together and getting a pinch of salt flavoured four.

This would make perfect sense for Assassin's Creed. Where a traditional TV channel might have problems investing in a video game series, publishers like Netflix with its current raft of Originals, have the money to spend on TV that's a little different and serves a specific audience. In a perfect world, I'd have a Netflix TV series that leaps back into various time periods. A new set of modern day Assassins diving into history via Abstergo's commercial Animus project and exploring smaller stories. This is rich material and given the time, wouldn't have to be the narratively exposition heavy burden that the movie had to be. Hidden blades crossed. I'll keep you updated.