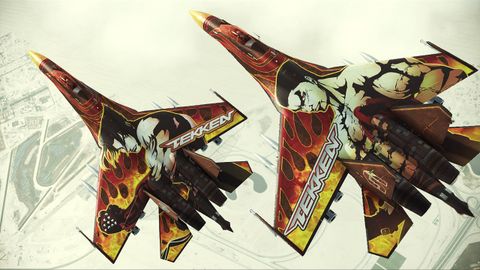 Ace Combat Assault Horizon is like a love letter to the idea of fun. The delivery method for said letter is to fold it into the shape of a paper F-22 Raptor, attach jet engines, machine guns, and missiles, and then run up a hill while making “neeeeeroouuuu” airplane noises before hurling that sucker into the sunny blue sky. We frame it this way because Assault Horizon is unabashedly an arcade flight game, with fancy camera tricks, regenerating plane health, and helicopters that can do barrel rolls (from a complete standstill no less). There is nothing dry and realistic here, nothing to scare away people who loved Top Gun but cringe at the word “sim.” This also means that Ace Combat fans may not be happy with what their beloved franchise has become.

We were happy. Very, very happy. We suspect if you play Assault Horizon and don’t enjoy yourself, you may just not like fun. That, or you’ll allow hangups about realism and “skill” to trick you into being unaware of how much fun you’re having. Yes, we realize we’re implying that people with different opinions from ours are just plain wrong and we know how silly that is, but we’re doing it to emphasize how stupidly, insanely entertaining Assault Horizon is. They key is to go in and not convince yourself that there’s a particular way the game “should be.” Just take it in, drink it deep, and let it blow your hair back. Way, way back. If that doesn’t work, take a moment and really listen to those heavy metal riffs – they’re telling you something.

Dogfight mode, or DFM, is what makes Assault Horizon into a big screaming rock concert at 30,000 feet instead of just another air combat game. Purists may decry it as a baby mode or something, but to do so requires ignoring the sheer glee of smoke, fire, bullets, and burnt metal flying in your face at Mach 2. The devs identified a problem in regular flight combat: most of the time you’re locking on to little specs that barely look like planes. Not only did they solve this problem, but they turned the fix into its own work of art. Get close enough on a bogey’s tail and a green circle appears around him. Tap two shoulder buttons and DFM begins. The game becomes semi on-rails, but we really must stress the “semi.” You get assist that helps keep you on your enemy’s tail, but only to a point – he can totally shake you if you’re not on your toes, and even so a squirrely enemy will keep you busy just trying to keep him in your crosshairs.

DFM isn’t about making things easy for you – it’s about making things more exciting, and wow does it succeed. You get to see the pretty enemy planes all up in your face, you get to view the action from super-sexy under-belly or “over the shoulder” camera angles, you get to actually use your guns since the targets are close enough to hit, and you also get taken on rollercoaster rides. See, sometimes when in DFM your target will take you on a scripted flight path between skyscrapers, along canyons, and even past landmarks which explode spectacularly or have collapsing crane parts for you to dramatically swoop under. The amazing part is all of it happens without any clear setpiece introductions – you are the one who initiated DFM and there’s no cutscene or anything to make the scripted flight path feel like it isn’t happening naturally. In fact, if you don’t engage DFM, you may never see these setpieces.

Above: Would you rather not fly through this?

In order to keep DFM from being your unfair advantage against the AI, the devs allow enemies to engage it against you. Once engaged, it’s difficult to shake an enemy, just as he has trouble shaking you. Your best bet is to perform a counter-maneuver – a red and green triangle will appear onscreen indicating how far behind you your pursuer is. If you hit the brakes and get him to be right on top of you, you can do a quick loop or barrel roll and suddenly you’re on his ass instead. Of course, enemies can do this counter-maneuver when you’re chasing them, but if you’re really quick, you can do a counter-counter-maneuver. You’ll need these fancy moves because there are “boss” pilots that are much more skilled than the average jet jockey.

DFM alone makes Assault Horizon incredibly fresh, but the devs were not content to just leave it at that. While air-to-air fighter missions make up the main course of the game, there are also side dishes in the form of helicopter missions, chopper gunner missions, a bomber mission, some ground attack missions, and an AC-130 gunner mission. These missions are never as deep or meaty as the dogfighting missions, but they’re all fun and they round out the game nicely and break up the pacing to prevent monotony. Highlights include a bomber mission where you have to fly low and avoid radar installations, an anti-ship mission where you strafe cruisers with rockets and guns, and a chopper mission in Moscow in the middle of a blizzard.

ASM, or Air Strike Mode, is like the ground-attack equivalent of DFM. In strafing missions you’ll have flight paths highlighted on your HUD – entering one switches to ASM where your guns do more damage and your missiles/rockets recharge faster. Like DFM it’s designed to bring the action more in your face, and though it’s decently fun, it doesn’t bring quite the excitement factor that DFM does. It does succeed in mixing up the action, much like the simplistic gunner missions.

Above: Strafing runs against cruisers in an A-10 Warthog are always welcome at any of our parties

There are other differences between this Ace Combat and its predecessor, Fires of Liberation, and how you feel about them is a matter of taste. Assault Horizon is much more accessible, with a simple default flight control setup where you don’t have to bother with rolling for turning – you just press left to turn left. The missions aren’t quite so open-ended, and even could be described as linear in certain circumstances. You don’t access your squadmates HUDs or call in special air strikes. So Ace Combat vets might call this a dumbing-down, but to them we say this: set the game on Hard mode and change the flight controls to advanced, but regardless the DFM provides so much intense awesomeness you’ll be too busy to miss the other stuff. Assault Horizon pares back some things to bring the dogfight into sharp focus, and it works.

Multiplayer is similar to Fires of Liberation, with some tweaks and improvements. Whereas co-op was a sad two-mission affair before, Assault Horizon presents a decent-sized mini-campaign of tweaked versions of missions from the single-player, with the difficulty ramped up to account for extra players. The multiplayer has a couple of new modes: Domination is what you’d expect – teams try to hold control points, but each is defended first by neutral Anti-air, and then faction-based AA once controlled. It’s a helicopter-focused mode, because while some maps allow any type of aircraft, if you want to hold an area you’ll want to be able to hover – of course you could mix your team so some members are the hunters in jets. The other new mode is Capital Conquest, which is similar to Siege Battle from Ace 6 with the exception of the new ASM mode – each team must destroy the other’s AA defenses to earn the right to engage ASM on the opposing HQ, and you’ll need ASM because the HQ is resistant to non-ASM attacks. We’re not sure yet how the multiplayer will fare with Ace Combat vets, but it was at least fun for a few hours.

Above: The good 'ol Apache brings a nice change of game flow to both single- and multiplayer

Ace Combat Assault Horizon walks that dangerous line many modern franchises are attempting these days: make an old formula more accessible and streamlined without alienating the hardcore fans. While we’re certain some fans will scoff at the changes, it’s difficult to argue, when you’re in the heat of a DFM moment chasing a “boss” pilot with guns roaring and skyscrapers hurtling past in a blur, that you’re not experiencing the closest thing to living Top Gun that you can imagine.