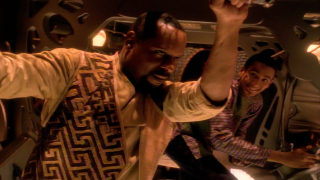 Of all the captains in Star Trek, Benjamin Sisko of Deep Space Nine is the one carrying the heaviest weight. Kirk is a charming explorer who loses friends and family. Picard is a charismatic, fearless scholar whose very humanity is stolen away. Their losses come well after we know them, though. They start high and are taken down later to make them better heroes. The universe is crushing Ben Sisko as soon as we meet him: not only is he stationed at the dead end of outer space; not only is he the primary peacekeeper between two alien races exiting decades of guerilla warfare and systemic subjugation; not only is he marked as the prophesied leader of the Bajoran people, the people subjugated by the fascistic Cardassians; Sisko is doing all of this as a single parent whose wife was killed because of his life in Starfleet.

He’s a broken man thrust into the center of galactic politics and religious conflicts, an explorer not of new planets but new, complex realms of diplomacy. And in the season 3 episode Explorers, when he successfully pilots an ancient Bajoran ship he built with his own two hands into Cardassian space just because he felt like it, his triumph embodies all of Deep Space Nine’s most powerful themes at the exact same time as he’s discovering how rich his new life is. It is the best bit of all seven seasons of Deep Space Nine.

Some scene setting: at the beginning of Explorers, Sisko is rocking a positively ferocious goatee. That is not crucial plot information - more than anything the goatee is just a potent reminder that this episode was made in 1995. The beard does at least tell you from the outset where Sisko’s mind is, though: while the threat of the Dominion, a race of totalitarian shape changers commanding an overwhelming military force, is on the rise Sisko has helped broker real political progress between Bajor and Cardassia. Both peoples are still in disarray, their central governments in collapse, but there are signs of hope for real peace. He’s even coming to terms with the fact that religious Bajorans view him as an almost saintly figure.

Sisko’s accepted the state of the world and he’s open to change. Thus the beard and a newfound fascination with ancient Bajoran culture, especially their early starships that could, according to legend, coast solar wind to actually leave not just Bajor orbit but the planet’s solar system and into Cardassian space. The ship becomes an obsession for Sisko, a new way to engage his community and reconnect with his son who he invites on the ship’s maiden voyage. It also becomes the object of diplomatic intrigue. If Sisko manages to sail his handmade ship into Cardassian space as he plans to, the Cardassian people will be forced to acknowledge the achievements of Bajoran culture and officially refute years of racist propaganda.

When the captain and his son set out, it’s not just a hobbyist lark. The ship is dangerous, their trip a prime target for sabotage. The very act of making the ship is subversive on both the personal and communal levels, which gets to the heart of what Deep Space Nine is all about. Where other Star Trek series are about the process of contact and understanding between people, Deep Space Nine is about the long term nature of statecraft. Commander Riker can step in and get a bunch of furry weirdoes to stop fighting on one episode of The Next Generation before moving on to some kind of embarrassing Holodek fiasco the week after. Kira, Odo, Dax, Sisko and the other residents of Deep Space Nine however deal with the living organism that is a relationship between two vastly different people where volatile enmity is an ingrained part of daily life. Sailing a delicate Bajoran lightship over a theoretically impossible distance is an act as dangerous as fostering peace between two people, as fraught as deciding to live a good life after you’ve seemingly lost everything.

While it’s touch and go - every episode of Star Trek benefits from a moment where it looks like everything is going to just blow up - Sisko makes it. After getting caught in a tachyon eddy (the Trekky science gobbledygook goes hand in hand with the all-is-lost peril), the ship comes out in Cardassian space. Gul Dukat, Cardassian leader and the only other character that can match Sisko’s glorious scenery-chewing, arrives in a ship to aid their trip back to Deep Space Nine. He is also there to, on the record, acknowledge that a Bajoran ship did everything his people said it couldn’t. The conflict isn’t over, but a step forward is taken. Sisko and his beard take another step forward too. And we the audience get a careful reminder that peace, like life, is a long and patient game.