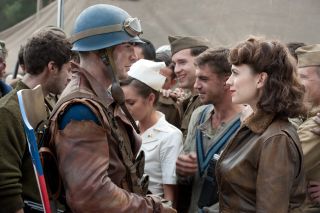 "Sexuality doesn’t exist for superheroes,” Pedro Almodóvar recently told
an audience when asked for his thoughts on Marvel movies. “They are neutered.” The Pain & Glory auteur makes an interesting point: romance has become a rare thing in superhero stories. However, I would add that amour isn’t just lacking in spandex cinema but in the vast majority of blockbusters.

Let’s first look at the MCU. During Phase One, each hero had their love interest, ranging from the mundane (Jane Foster) to those deserving of a spin-off (Pepper Potts). Formulaic stuff, sure, but Peggy and Steve’s relationship transformed The First Avenger from a borderline by-the-numbers origin story into something truly heartfelt.

By the time Phase Three rolled around, the idea of superheroes being sexually active was banished. Rachel McAdams gets minimal screentime in Doctor Strange, while Black Panther’s T’Challa and Nakia are allowed no more than a mild flirtation. Captain Marvel is arguably the most ‘neutered’ of them all, with no obvious love interest. At least Avengers: Endgame finally brought Peggy and Cap together again, making for the movie’s best moment.

Other studios have also phased out onscreen romance. Gemini Man teased romance between Mary Elizabeth Winstead and Will Smith, yet nothing came to pass. Godzilla: King of the Monsters may be the least romantic story ever told. Even Disney’s live- action Aladdin and The Lion King lack the fizz of their animated counterparts.

Worst of all, the new Star Wars movies have lacked all romance. In the original trilogy, the chemistry between Leia and Han is palpable. The pair share multiple good smooches, while The Empire Strikes Back contains one of the single best expressions of love ever seen on screen. We’ve been teased ReyLo and FinnPoe, with neither actually happening. Finn and Rose shared a kiss, yes, but not exactly a sizzling one.

Of course, we still have romance in movies, mainly in the groundbreaking stories being told in queer cinema: Call Me By Your Name, Carol, God’s Own Country and Moonlight to name a few. Hopefully, we’ll see more of that in blockbusters, because they’re becoming less and less romantic... or is it just me?