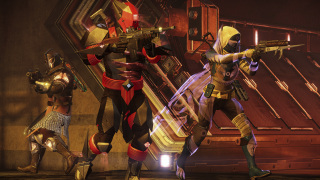 As battle-hungry Guardians steel themselves for Destiny’s upcoming Rise of Iron DLC, those that fell away from the battle, weak, weary or wounded, might be looking at Bungie’s blockbuster shooter again with fresh interest.

So, if you’re a little out of practice, worry not; here are our top tips to get you all - the new, the veteran, or simply those who fell a little behind - battle-ready again.

We believe in you, Guardian.

It’s a scenario we all know too well. You were knee deep in the fight, your trusty Ghost at your side, but something else came along - something new and shiny and exciting - and suddenly you lost your way. It’s okay, Guardian - I’m not holding it against you. We’ve all been there.

The key here is to procrastinate no longer. You need to get back into battle, and quickly. As each first-person shooter varies with its own unique blend of environments, speed, and gunplay, if you’ve been getting your FPS kicks elsewhere of late, you’ll need time to acclimatise to Destiny all over again. Explore your terrain, experiment with your weaponry, tweak your perks, adjust your subclass abilities, and finish up those story missions. Give yourself time to re-adjust. Just dust off that armour and jump back in - there’s a galaxy to save, after all.

Not everyone’s going to hit the top light level - currently capped at 335 - by the time we step into Rise of Iron, but that doesn’t mean you shouldn’t try. The difference between going into battle as a 315 Guardian compared to a 320 is greater than you might think, so never give up the fight to keep levelling up. Although at 320+ much of it comes down to luck (not everyone’s going to get all the best gear all of the time), the odds are better stacked in your favour if you bite the bullet and attempt the harder challenges.

While raid gear remains among the strongest, if you’re 310+, try and make the Nightfall Strike and the toughest Prison of Elders challenges part of your weekly rotation. Oh, and don’t forget to pop a Three of Coins buff if you’re tackling any named opponent. This significantly boosts your chance of higher spoils (but definitely doesn’t guarantee it. Oh, Bungie, you little scamps!).

If you’ve been quietly squirreling away your Strange Coins, Motes of Light, and/or Legendary Marks for a rainy day, resist the temptation to binge-spend it now. Though Xur or the Cryptroll - sorry, I mean, Cryptarch - might have something shiny to tempt us in the final days before Rise of Iron drops, be cautious. With new content comes new spoils, and as yet, we’re unsure precisely what those spoils might cost us.

Running low on funds? You can stock up on Marks by dismantling Year 2 Legendary gear you no longer need (you’ll get three for basic legendary stuff, and four or five if the item is fully upgraded). It’s less straightforward to harvest Motes of Light or Strange Coins, but for the former, ‘ranking up’ post-Level 40 will drop a Mote your way, and for the latter, I’d recommend tackling Strikes, testing your mettle in Crucible, or jumping into Court of Oryx and hoovering up all those lovely engrams. Every now and then, one will transform into a shiny coin.

I never have enough Helium Filaments. Ever. It’s ridiculous. But if you’re regularly jumping into the Daily Story and Crucible challenges - both of which reward you with 15 Legendary Marks apiece - it won’t take long to hit the 200 cap so you’ll need to spend them somewhere.

The solution? Buy materials. Though you can head to the respective planets for farming fun, it takes less time - if not money - to head to the Tower Hangar and drop by Roni 55-30, the Vanguard Quartermaster located near the Shipwright. Here, you can exchange ten Legendary Marks for 20 materials of your choice, simultaneously freeing up your currency ceiling and boosting your materials. This way you’ll have a good stock of materials to upgrade once Year 3 items drop, and you won’t be participating in the Daily Challenges for little more than kudos and more awesome blue engrams.

The interesting thing with Destiny is there’s rarely a status-quo. No sooner has someone crowned one particular gun the PvP or PvE weapon of choice, (Thorn, for instance, or everyone’s Y1 rocket launcher of choice, the majestic Gjallarhorn), than our friends at Bungie wave their Nerf Wand and suddenly, all bets are off.

At this point in proceedings? We’re really not sure what weaponry - or, more importantly, which perks - will reign supreme as we step into Year 3. Therefore, you should retain as many exotics weapons as possible, and never dismantle your old favourite, even if it’s not particularly powerful right now. Who knows what gear will pop up on the Blueprint screen ready for upgrading to Y3 glory…

6. ...but don’t keep duplicate Exotics (or anything you definitely won’t use)

With The Taken King came infusing, Bungie’s weird but wonderful way of cannibalising the light of higher, less desirable items to make your favourites more powerful. (Or just look better - I’m not ashamed to admit it).

Since infusion was rebalanced to always award the infuser with the full light level of the infusee (yeah, I just made up that word), it’s more tempting than ever to dismantle Legendary gear - and yeah, even the occasional Rare gear - to beef up our favourites. But if you’re looking to improve the stats of any exotic gear - weapon or armor - you’ll need to sacrifice an exotic shard, too… and those don’t come cheap. The best, and most cost-effective, way to do this is to dismantle any unwanted exotic guns or armor, as doing so throws an Exotic Shard into your inventory. But again, don’t rush into using these now. Who knows what awesome rocket launcher or helmet is waiting for you just around the corner...

I know. Asking you to stockpile guns you don’t use for reasons we can’t yet understand is stupid, and never more so if your vault - even with the expansion that rolled out with The Taken King - is a little on the full side.

That said, there is extra storage available if you’re prepared to be a little sneaky about it. While your Vault may be filling up, each Guardian - and you’re allowed three, all of a different class - has generous individual inventory space, too. So even if you haven’t created new Guardians or experienced Destiny as all three classes, create new Guardians anyway. Then hop onto the Companion App and move items easily around your Guardians and Vault, effectively tripling your inventory space. Don’t forget, you can also safely dismantle all shaders and emblems to free up room, too.

Get the latest Destiny: Rise of Iron news, tips, guides and information in our Destiny Rise of Iron hub which we will be constantly updating