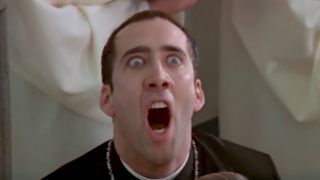 You've seen it. I've seen it. We've all seen it. Nic Cage's facial expressions are notorious on the internet, whether they're being used to sarcastically remark 'YOU DON'T SAY?' or simply being appreciated for their majesty. He's pretty much a wild card, being sometimes famed for his roles in Raising Arizona or Kickass, and on other occasions going 'maximum Nic Cage' where all logic and nuance goes out the window, and he lets rip. It's where we see the actor at his finest.

Always keen to celebrate a legend, we've gathered together the 25 most (beautifully) insane Nic Cage moments of all time. Not only are these scenes from some of his movies, they're also moments from the actor's life, and memes that have sprung up from the darkest corners of the internet. Enjoy.

The Nic Cage Moment: Ex-con H.I. McDunnough (Cage) and his cop wife (Holly Hunter) are struggling to make ends meet. With his bad rap sheet and a kidnapped baby to feed, H.I. decides to go back on the game. He starts stealing again.

Why It's Nuts: 'Cause he steals nappies then legs it down the highway, hell for leather, with a pair of pantyhose on his head.

Why It's Awesome: While H.I. isn't the zaniest role Cage has tackled, this brief glimpse at the lengths he would go to onscreen was a precursor to far more baffling performances in his future.

The Nic Cage Moment: Professional criminal, Memphis Raynes (Cage) silences his crew of car thieves before they depart for a job, so they can all listen and appreciate the song 'Lowrider'.

Why It's Nuts: The moment of meditation while he considers the music, the perplexed looks on the faces of his co-workers, and of course, we can't forget...

Why It's Awesome: Cage's jazz-hand shimmy, followed by "Let's ride!" was the best part of the entire movie.

The Nic Cage Moment: Fresh out of the slammer, Sailor Ripley (Cage) hits the road with his long-term love, Lula (Laura Dern) who struggles to find anything worthwhile on the radio.

Why It's Nuts: Sailor tunes in to a raging metal station and immediately lets out a throaty growl, followed by shrieking and throwing of the horns. All of this delights Lula who joins in, and the pair rock out in the desert shrubbery with Sailor performing his own unique style of martial art.

Why It's Awesome: The back flip Cage performs to exit the vehicle.

The Nic Cage Moment: Aboard a flight of convicts heading home after serving his time, Cameron Poe (Cage) ain't happy when a riot breaks out and an inmate gets ahold of the gift he bought for his daughter's birthday.

Why It's Nuts: Instead of Cage launching on the guy for getting his greasy dabs all over the stuffed toy rabbit, he calmly asks "Put the bunny back in the box" in an accent which can't be pinned down to one continent alone.

Why It's Awesome: He says the legendary one-liner thrice - just in case you don't catch the brilliance of his delivery the first time around.

Why It's Nuts: It's true: there's a biology schoolbook which was in circulation in the early 90's featuring a still of Cage and Holly Hunter from Raising Arizona on the cover.

Why It's Awesome: It's super-imposed on top of a rose garden.

The Nic Cage Moment: Curated by dedicated Cagian Ezra Croft, the show debuted in San Francisco back in April 2014 and hit Los Angeles in July.

Why It's Nuts: The whole idea plays like a fan-fic convention... except it's artwork submitted by fans depicting Nicolas Cage across a variety of mediums in a range of poses.

Why It's Awesome: Its success has inspired a Bill Murray art show.

The Nic Cage Moment: In the height of Cagian memery, one fan took a still from the 2007 flick, Next, and spruced it up with an ornithological theme.

Why It's Nuts: It evokes laughter as soon as you lay your eyes on it. Come on. His hair is a bird!

Why It's Awesome: The bottom of the meme reads: 'My hair is a bird. Your argument is invalid.'

The Nic Cage Moment: In July 2007, Cage's decadent spending habits crested the height of opulence. He bought a dinosaur skull at auction.

Why It's Awesome: After a lengthy bidding war, he outbid Leonardo DiCaprio.

The Nic Cage Moment: More than your average mash-up, this song by Toby Fox remixes the actor's best lines into a poppy dance number.

Why It's Nuts: So many reasons. The use of "I'm a vampire!" as the improvised chorus, the boner synced up with the bass beats and not forgetting the in-screen boxes featuring the clips the samples are taken from.

Why It's Awesome: Around 1:50 a middle eighth kicks in, incorporating a single laugh from Leaving Las Vegas (with pissed blood!) from Matchstick Men to form a catchy little ditty.