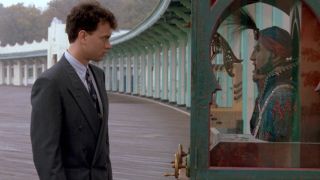 What would it feel like to be someone else? That question is kind of the basis for all fiction ever, from romantic comedies to space operas, since theyre all about following the adventures of someone in circumstances youd probably never find yourself in.

But theres a sub-genre of movies that takes the question literally, and features characters physically or mentally swapping places with someone else. The outcome? Usually, either wacky comedy hijinks or deep philosophical revelations. Or both.

Whos Swapping? No prizes for guessing whos swapping with whom in this mostly-forgotten 80s comedy. Dad Jack (Dudley Moore) is a surgeon, while his son Chris (Kirk Cameron) is a mediocre student.

How They Swapped: Via magic mind transference potion. As you do.

Consequences: Just mild awkwardness, really, as Chriss popularity at school takes a hit, and Jacks reputation among his colleagues similarly drops. But its all okay in the end.

How They Swapped: Technically, this isnt a swap, since Jake doesnt exist as a separate being but its a badly timed power cut and a virtual reality machine that catapults Justines mind into Jakes virtual body.

Consequences: General hilarity, plus a lesson or two on what its like to be a teenage boy.

How They Swapped: By wishing on a shooting star. As the title kind of implies.

Consequences: Some mild reputation-denting dramas, as the squabbling sisters try to cause trouble for one another by dressing in ridiculous clothes and annoying their friends. But since wish-granting stars are easy to come by, they dont have to spend long in the wrong bodies. This is a pretty lightweight made-for-TV drama, but the cast make it worth a look.

How They Swapped: By accidentally coming into contact with a magical stolen skull while wishing they could swap bodies. Because thats how all frustrated parents and children deal with their problems, no?

Consequences: Charlie almost loses his dads job for him; his dad gets him in trouble with his mum, and then gets him kidnapped. The magic skull gets it all sorted out in the end though.

How They Swapped: By, um, peeing in a magic fountain and wishing they could have one anothers lives.

Consequences: Mitch-as-Dave nearly destroys an important business deal, while Dave-as-Mitch gets an ill-advised tattoo. But as per, it all ends happily and no-one is permanently scarred by their swap. Except Mitch, whos stuck with his I love Dave tattoo.

How They Swapped: A voodoo ritual lets Ray pop out his soul and stick it in the nearest available empty vessel, a doll. If you wanted to be pedantic, its not quite a swap, since the doll didnt have a mind or soul to swap with, and Rays body ends up dead, but he definitely jumps bodies.

Consequences: An evil, unstoppable doll goes on a killing spree, and a whole new horror franchise is born.

How They Swapped: Via Wiccan ritual and magic earrings.

Consequences: All kinds of chaos. Clive-as-Jessica becomes a pole dancer and continues his life of crime; Jessica-as-Clive spies on all her friends and learns valuable life lessons. The less said about the very end, the better. Urgh.

How They Swapped: Again, its because of a wish. Tash wishes that Brett could know what its like to be her, and because its a full moon, her wish is granted. Who knew it was that easy?!

Consequences: Trapped in one anothers bodies for an entire lunar cycle, the unlikely couple learn to appreciate one another and live happily ever after. Awww.

How They Swapped: Again, technically, this isnt a body swap its a face swap, as Archer gets a surgeon to give him Troys face so he can go undercover and root out his accomplices. And then Troy demands Archers face in revenge.

Consequences: Archer nearly ends up getting stuck with his new face and left in prison forever, while Troy runs riot using Archers face for credibility. But in the end, Archer kills Troy and nabs his face back. Which is as close to a happy ending as this film was gonna get.

How They Swapped: A car accident, combined with a wish to be young again, puts Jack in Davids body, and leaves David in Jacks body and in a coma.

Consequences: While Jacks busy enjoying his newfound youth, David nearly dies in hospital, which is a bit bleak. Also, Jack discovers how horrible everyone is, including his trophy wife. But they manage to swap back, and its all okay. Just like it always is.

Click 'Next Page' to see the top 10 films in our body swapping countdown.