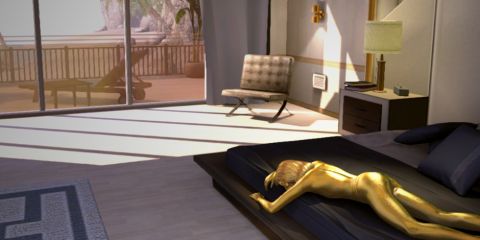 In the late ‘90s, James Bond’s name was as synonymous with first-person shooters as Mario’s was with platforming. But things have changed since 007 was perched atop the genre’s ranks on the N64. Now, Activision’s Call of Duty franchise is the reigning king, and the yearly releases of 007 games feel like an obligation of the publisher more than an earnest attempt at rekindling old feelings for the character. 007 Legends is the latest experiment with resuscitating the agent’s muddied gaming career, and though there are some interesting ideas scattered throughout, the overall game is more Quantum of Solace than Casino Royale. Actually, it might be more Austin Powers in Goldmember.

Watch the launch trailer to see the different locations

Beginning with a scene out of the as-of-yet unreleased Skyfall, 007 Legends shows Daniel Craig’s James Bond being struck by a sniper’s bullet while fighting on a moving train, causing the agent to stumble off the side and into the lake below. As he descends into the dark depths, his past adventures flash before his eyes, giving you an excuse to play through abridged climaxes of his classic spy movies. Even Bond’s near-death experiences are cool.

As expected, a majority of the game is spent gun in-hand as Bond runs through Goldfinger, On Her Majesty's Secret Service, Die Another Day, License to Kill, and Moonraker, killing lackeys non-stop for the five-hour long jaunt. There are times where shooter in Legends clicks--some gunfights are exciting, and blasting away inaccurate henchman definitely evokes the James Bond vibe--but a majority of the time, the major set-piece battles end up remarkably dull. Each movie has its own set of levels that follow the same basic rhythm, with you controlling Bond as he blows his way from uninteresting battle to uninteresting battle, occasionally stopping for frustrating driving segments that the game would be better without, even if it adds some interesting variety.

Sometimes, though, you’ll be allowed to do more than simply run through hallways filling generic enemies with bullets. At some points you’re tasked with using Bond’s gadgets to stealthily work your way through guard-filled rooms, or asked to investigate an area for clues. Surprisingly, these segments can work well. They’re still not great, or even all that good, but they’re at least serviceable, and set 007 Legends apart from others in the genre--at least for fleeting moments.

The occasional brawler segments fall into that same class, earning points for originality even if they’re a bit one-note and simplistic. It’s strange that, despite being built modeled after Treyarch’s and Infinity Ward’s shooter, Legends falters the most when it comes to doing what Call of Duty does best, and shows the most promise when it attempts to stray off the beaten path.

These occasional glimpses of ambitious gameplay don’t carry over to the story in the least, which incoherently jogs from plotline to plotline with no aspirations to create a cohesive experience. The narrative feels disjointed and rushed, making no attempts at actually linking together these moments, or even explaining why James is randomly remembering these specific journeys. They also lack context: Bond aficionados might understand why there’s a gold-painted woman laying nude at the beginning of the Goldfinger level, but those who haven’t followed the double-oh agent’s journeys will likely be in the dark.

Even fans might end up having problems with the way the story is told, despite nonstop nods to the classic franchise. All of the films are forced into modern-day settings, even when it doesn’t always make that much sense. As such, it runs into the same problem as the Goldeneye remake: Too much power is given to the almighty smartphone, creating a Bond that feels less sleek and savvy than before. What’s worse, memorable Bond villains and characters are reduced to mere soundbites, wheeled in to deliver their lines versus a very bored Daniel Craig and then dragged away until it’s time for yet another melee battle. Some might toss a “fan service” flag over the entire thing as an excuse, but it’s more of a wet blanket.

And while that’s all fairly problematic, even more disturbing is that the story doesn’t have an ending at all. Once the Moonraker level (abruptly) ends, the credits flash up, promising free downloadable content tying to Skyfall in early November. This DLC isn’t just another mission--it’s the actual ending of the game. The fact that Legends is getting more content in the coming weeks isn’t really a problem (in fact, it’s a neat way to tie in the upcoming movie without being held back by the release date of the film), but when the core, framing narrative that begins in the game isn’t finished in the game, it’s unforgivable.

Once you’ve finished the short, ending-less campaign, there’s not much to keep you around besides waiting for the Skyfall DLC. Multiplayer offerings are heavy on substance, but they’re nothing to get excited about--something made worse by empty servers and laggy gameplay. There’s a challenge mode, too, which actually does a good job of presenting some of the more interesting ideas from the game in bite-sized form. But they aren’t really all that entertaining either, and you’ll have to really force yourself to find an excuse to try to best your score in a middling romp through a level you already played.

Bond’s latest shooter is barely kept afloat throughout the five-hour-long campaign, but while it has a smattering of good ideas, they’re buried beneath concepts so tired, you’ll have a hard time caring. It's a game filled with occasional highs and frequent lows--and you’ll be thrown between them so quickly and haphazardly that you’ll be lucky to make it through 007 Legends without whiplash.